So I saw that CeCe was requesting help promoting her debut book on twitter. I clicked the link to goodreads read the synopsis and fell in love. So today I am very excited to reveal the cover of this wonderful book…. 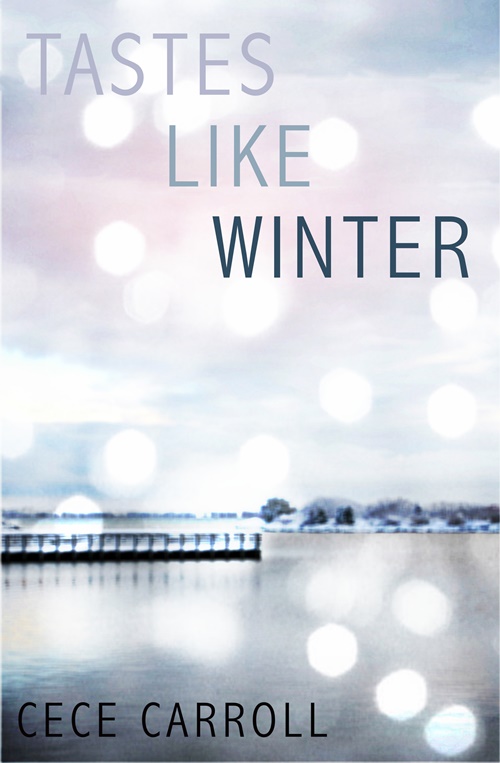 
When home no longer feels like home – where can you go?

When your best friend won’t listen – who can you turn to?

When love makes you feel weak – how do you protect your heart?

With constant fighting at home, Emma decides working at High Street Books and practicing avoidance is the best method to save her from more heartache.

She doesn’t expect to meet Jake, the shop owner’s nephew,

who makes her stomach do crazy things.

But Jake is intent on pushing her away, and Emma must ask herself:

Is he scared? Or is he hiding something?

Tastes Like Winter is a story of love, family, and friendship and, when everything is uncertain, trying to figure out where you fit in.

CeCe began writing as an escape from her days as a corporate slave laborer. She grew up splitting her time between the beautiful beaches of New Jersey and the bustling city of New York. Currently, she lives in Massachusetts with her super handsome and talented husband and two adorable, but often-sassy cats. CeCe gets excited easily, mostly about travelling, food, and of course, her first love: books.

“Your pick. Traditional snowball fight? Or sledding? I have a sled in the trunk and that hill”—he points to the far edge of the park—“looks like it would work.”

If I choose the snowball fight, I might end up with a face full of snow, quite the risk, but flinging packed balls back at him sounds like fun and might end in snow wrestling, which would be more than worth the chill. However, if I pick sledding, there will be a lot of tiresome hiking up and down the hill, but also a good chance I can ask him to go down with me, allowing me to feel his body pressed up against my back.

I look at him devilishly. “Prepare for battle!”

And I dart away from him before he has the chance to process my answer. I decide to play tactically, using the jungle gym as a barrier. I throw myself behind the cover of the slide and begin packing together snowballs as quickly as I can. He runs after me and copies my strategy by positioning himself behind the playground’s merry-go-round.

I thought I had time and the element of surprise on my side, but he is fast, and before I know it, he is flinging balls my way. The first one smacks the slide beside my head and explodes into icy dust. Crap! He has good aim. I wasn’t counting on that.

“You’re gunning for blood, aren’t you, Addler?” I taunt, throwing one back at him. While it doesn’t come quite as close as his, it’s not a bad first attempt.

We continue tossing snow back and forth from a safe distance, trash-talking and egging each other on. I land a solid hit on the side of his face that leaves him stunned, and seeing a window of opportunity, I charge at him. I don’t have another ball prepared, so instead I throw my whole body at his, knocking him away from the merry-go-round and down into the snow. I childishly and triumphantly bury his face, shoving heaps of powder down into his jacket as I go. Once he has sufficiently paid for his smack talk, I sit up, my knees on either side of him, straddling his body. The position is intimate, and despite the fact that his face is still covered and he must be freezing, I feel a stiffening in his pants.

I gasp at the contact. My momentary distraction gives him time to recover, and he twists, pulling his body over mine and throwing me to the ground. He hovers over me, locking my wrists above my head and pinning my body down, sinking us deeper into the snow. I cower, afraid of his retaliation and waiting for my own onslaught, but he doesn’t move to enact his revenge. Instead he pants heavily over me, trying to catch his breath. His cheeks are spotted with redness, and his hair sticks up from the dampness of the snow.

“You little hellcat, you. You are so lucky you’re a girl, or I’d totally be annihilating you right now.”

I squirm under him, trying to free myself before he changes his mind and stops taking pity on me. The movement presses my hips up against him, making contact again with his physical excitement. It doesn’t go unnoticed, this time.

“Fuck! Are you trying to kill me?”

He rolls off and kneels beside me in the snow. His breath continues as a series of sharp inhales before finally slowing and returning to a normal pace. I don’t even try to get up, but rather I continue laying there, the warmth in my lower belly enough to shield me from any cold. I imagine pulling him down, kissing him hard on the mouth, and having ourselves another roll around in the snow, but I already decided I wouldn’t throw myself at him and risk getting shot down again. I’d rather wait for him to make the first move. So that’s what I do, quiet on the outside, but with my mind screaming at him. Kiss me, Jake! Kiss me!

Unfortunately, Jake does not appear to be telepathic.

After giving himself enough time to recover, he lays back on the ground, close but purposefully not touching. “You know what would be good right now?”

Your tongue in my mouth? I silently reply.

Wrong answer, Jake. Wrong answer. While hot chocolate is not the first-choice liquid I’d like to be savoring right now—that honor would go to more salivary fluids—it is one of my favorite winter staples, and I happen to have all the fixin’s at home.

I sigh louder than I want, releasing some of the sexual frustration with my outward exhale. “Okay, Jake. I wouldn’t mind some hot chocolate. Let’s go to my house.”

CeCe began writing as an escape from her days as a corporate slave laborer. She grew up splitting her time between the beautiful beaches of New Jersey and the bustling city of New York. Currently, she lives in Massachusetts with her super handsome and talented husband and two adorable, but often-sassy cats. CeCe gets excited easily, mostly about travelling, food, and of course, her first love: books.

Blog Tour Review: Tastes Like Winter
Book News: Anyone But Him Cover Reveal