How is it Friday already! Where did this week even go???Anywho today I have an extract from Laura Briggs to share with you.


It’s the career move of a lifetime, and Julianne can’t believe it’s hers: a position as an event planner at a country house in Cornwall, England, beginning with the wedding of a celebrity! If her old firm’s senior planner back in the States hadn’t fallen suddenly sick with the chicken pox, Julianne would never have found herself chosen for a life in one of England’s most beautiful coastal counties, surrounded by rugged shores, quaint cottages, elegant gardens and a house to die for.

But life in Cornwall isn’t exactly as Julianne imagined it. Her first bride-to-be is a resentful, petted snob, the groom is immature and bored, and the Cornish staff of Cliffs House has a difficult time believing that an event planner from a mid-level position can handle a wedding this big. And then there’s a personal matter — the handsome, sometimes charming, sometimes standoffish gardener Matthew Rose. He and Julianne have a strangely complicated relationship somewhere between friendship and attraction. But with a secret in his past, and a scheming bridesmaid plotting to have Matthew all to herself, will Julianne find a way to untangle her feelings and the problems of planning a perfect Cornish wedding?

One of Cornwall’s milder breezes swept across me as I found my way past the formal hedgerows to the winding little path to the sea. I buttoned my green pea coat as I climbed down, gradually moving from the craggy slate walkway carefully built like a natural stair to the soft, wild grass growing alongside it. I angled my way towards the view of the water below, hearing it surge and crash against the cliff’s walls.

The wind rose and batted my hair across my face. I could see the Channel below, washing its way between the shores. I could see the beach, the stones and sand lost along the shallow edge whenever water rushed up from the sea. I sucked in my breath, imagining the power of the waves if I were below, walking along the strip of white foam instead of the soft grass and delicate purplish flowers around me.

That’s when I noticed I wasn’t alone. A man was kneeling near the edge of the cliff a few yards away at the foot of the stone path, watching the water also. Wind swept his dark, unruly hair back from his brow, and fanned the edges of his worn brown canvas jacket. Between his fingers was a sprig of something dark green, a plant or a leaf of some kind.

Sensing my gaze, he turned towards me. I felt my breath catch. He was attractive. But more than that, he was… familiar.

The handsome stranger from the railway station, his dark good looks even more impressive against the stunning backdrop of the cliffs and water below. A day’s worth of stubble made his well-formed features even more pleasing:  features that were accented by eyes that I imagined as dark as coffee beneath those perfect lashes and sculpted brow. For a moment, we stared at each other. Then he spoke.

“Do you mind getting off the heath?” A gruff, commanding voice that was filled with disgust — even though he was practically shouting over the ripple of wind and tide, I could detect that much.

I gaped at him. “What?” I asked. His manners weren’t as pretty as his looks, apparently. I felt a surge of annoyance along with my confusion for the accusation in his voice. Why was he talking this way to a perfect stranger? Who did he think he was anyway? Besides a good-looking…but no. That wasn’t enough to justify the rudeness etched in his perfect face, or the scowl he offered my shoes.

“You’re standing on it,” he said. “The heath. What are you doing off the footpath? Can’t you see you’re trampling it with those spiky shoes of yours?”

Laura Briggs’ first stories were written in crayon about a rooster named Henry–but she was pretty young at the time, so it’s understandable. She eventually graduated to writing more complex plot lines and characters and writing her stories on a laptop. She tends to write stories with a romance theme, but as a reader she has a soft spot for mysteries, including those by Agatha Christie and Mary Roberts Rinehart. She also enjoys books by Jane Austen, Anne Tyler, Amy Tan, and too many others to name. In her free time, she likes to experiment with new recipes and tries to landscape her yard (a never-ending project).

Book News: Beneath the Moon and the Stars Chapter 3 Reveal 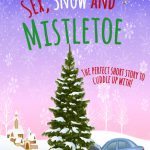