Debbie Can you tell us a little about you?

My name is Debbie Johnson, I’m a writer, mum of three, and the very opposite of a domestic Goddess. I live near the coast in Liverpool in a very messy house full of kids and dogs, where I earn my living at my laptop – copywriting, journalism, and of course writing books. That’s my favourite one. I’ve been published by Penguin Random House with my urban fantasy books, Dark Vision and Dark Touch, and by Maze for a supernatural crime thriller called Fear No Evil. Harper Impulse is my lovely home for romance – which I love writing. My first release for them was Cold Feet At Christmas, which did really well, and I am now in a state of panic about my follow up, Pippa’s Cornish Dream!

Pippa’s Cornish Dream is set on the North Cornwall coast, which is so wild and beautiful and utterly perfect for romance. It tells the tale of Pippa Harte, a young woman who unexpectedly inherits the job of stand-in mother to four rag-tag kids, as well as a farm, when her parents die. That might sound gloomy, but she’s a fab character – really positive and warm and funny, and she always tries to look at the bright side of life. She’s just about coping with juggling the children, finances, and her holiday cottage business – until a face from her past strolls in and upsets the apple cart. That would be Ben Retallick, who she fell in love with at the age of seven and hasn’t seen since. Ben has his own issues, and a very thorny past, and the story follows them on the journey they take both as individuals, and as a couple. It is – at least I hope it is! – funny and sexy and heart warming. That was the intention anyway!

Mainly I write where I am now – on my sofa, with my snoozing dogs at my feet. But I once had a holiday to Northumberland and have fond memories of sitting out in the garden in the sunshine, on the edge of Hadrian’s Wall, tapping away – that was pretty inspiring!

Q) Where do you get your character inspiration from?

I hope all my characters are very different – so far they’ve included a tough-talking private eye from Liverpool; a journalist who discovers she’s a Goddess, and a runaway bride! But they do all have common traits – mainly a sense of humour. I can’t take to anything if there isn’t at least a thread of humour in it, and often entire books and characters will spring from me thinking about just one funny scene.

Eeek! That’s a tough one. There’s a fantasy book called Pawn of Prophecy by David Eddings that I read as a teenager, and have consistently read again and again, so that would be in. Then 101 Dalmations by Dodie Smith. Then I’d have to be sensible and get some kind of Surviving on a Desert island for Dummies self-help manual…or, if I’m not allowed that, I’d take something by the crime writer James Lee Burke.

I read everywhere, and always have three books on the go – one for the car (waiting outside the gates on school runs!), one downstairs, and one upstairs. Probably in bed is my favourite – assuming I can’t be in blazing sunshine beside a pool, nursing a cocktail.

It would be that David Eddings one I think. I know it’s not cool – I should go for something more literary, or hip, but I’m just being honest! It’s a really fun book – but it also just reminds me of a very simple, innocent time in my life, when all doors were open and all choices yet to be made. Before I got old and battered!

I like spending time with my children – they are really good fun – and taking the dogs out for long walks on the beach. I love travelling, and spend hours planning ‘if I won the Lottery’ holidays that I’ll never go in – it’s very sad, I have itineraries and everything! I also have a really good circle of friends and am often to be found at a pub quiz. Usually losing.

Neither at the moment, I am trying to convert my body from a run-down shack into a temple…but usually, chocolate.

For commercial reasons, I’d have been happy with the Hunger Games! For both commercial and author jealousy reasons, Charlaine Harris’s Sookie Stackhouse books. For pure craftsmanship, a book called The Tin Roof Blowdown by James Lee Burke – it’s all set in Louisiana post Hurricane Katrina, and is both a gripping thriller and one of the most beautiful, poignant pieces of writing I’ve ever come across.

That very much depends on who I was with! If I was with my kids, we’d go to Disneyworld in Florida – I am a sucker for Disney! If it was with pals, New York. My hubbie, then Italy. I’ll just take a round-the-world ticket please!


Every summer has a story…

Since Pippa Harte was forced to take over her parent’s farm, she’s barely had time to shave her legs let alone make time for love. Now she’s more likely to be getting down and dirty mucking out the pigs – and avoiding those of the human male variety.

When Ben Retallick walks out of her childhood and back into her present it seems that perhaps Pippa has more time than she thought. All Poldark smoulders and easy-going charm, Ben’s definitely worth whipping her wellies off for!

But Ben is a man with his own past and his own issues – and as much as she’s enjoying having him around, she’s got to get a grip. After all life isn’t always a beach … even if you are in Cornwall.

Set on the gorgeous Cornish coast at the height of summer, this is the perfect romance to take on your hols! 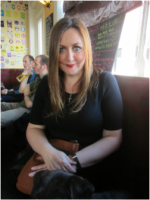 Review: The One with All the Bridesmaids
Review: Picnics in Hyde Park

Blog Tour Review: As Greek as it Gets
« Review: New Year At The Ritz
Book News: Guest Post Lori Connelly »