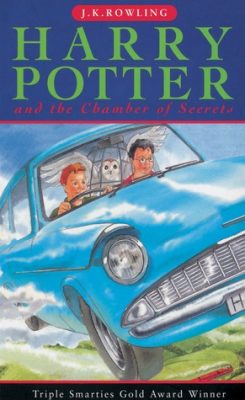 Ever since Harry Potter had come home for the summer, the Dursleys had been so mean and hideous that all Harry wanted was to get back to the Hogwarts School for Witchcraft and Wizardry. But just as he’s packing his bags, Harry receives a warning from a strange, impish creature who says that if Harry returns to Hogwarts, disaster will strike.

And strike it does. For in Harry’s second year at Hogwarts, fresh torments and horrors arise, including an outrageously stuck-up new professor and a spirit who haunts the girls’ bathroom. But then the real trouble begins — someone is turning Hogwarts students to stone. Could it be Draco Malfoy, a more poisonous rival than ever? Could it possibly be Hagrid, whose mysterious past is finally told? Or could it be the one everyone at Hogwarts most suspects…Harry Potter himself!

I got bought paperback copies of the Harry Potter books with the original Bloomsbury covers. I was so excited I started Chamber of Secrets immediately.

I have to say even 18 years after it was first published this is still an amazing book. I read it in one day. I barely put it down mainly just to eat and sleep.

The world doesn’t need another gushing review of HP so I won’t bore you with the same thing you have read a million times over but I enjoyed this book just as much if not more than when  first read it all those years ago.

JK really is an amazing writer. From the moment you start this book you are thrown back into the world of Harry, Ron and Hermione. From flying cars to petrified students this book has everything you need. With the perfect mix of magic and mystery this story makes you believe that Hogwarts really could be out there somewhere (I know we are all still hoping)

I have decided to read one HP book a month for the rest of the year so look out for more reviews and I will end on the 8th story. 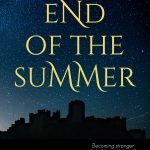