If your boss was the hottest rock star on the planet, would you mix business with pleasure?

I’m Meg Stiles. This is my leaving party. And that song we’re making a mockery of? That’s written by one of the biggest rock stars in the world. And I’m moving in with him tomorrow.

Seriously! I am not even joking. Well, maybe I’m misleading you a little bit. You see, I haven’t actually met him yet…

No, I’m not a stalker. I’m his new PA. His Personal Assistant. And I am off to La-La Land. Los Angeles. The City of Angels—whatever you want to call it—and I can’t bloody believe it!

Celebrity PA to wild boy of rock Johnny Jefferson, Meg’s glam new life in sun-drenched LA is a whirlwind of showbiz parties and backstage passes. Cool, calm Christian, in town to write his famous friend’s biography, helps keep Meg’s feet firmly on the ground. But with Johnny’s piercing green eyes and a body Brad Pitt would kill for, how long will it be before she’s swept right off them again?

This was my third Paige Toon book and it did not disappoint. With the beautiful setting and the luxurious lifestyle it was hard not to enjoy it.

Meg’s predecessor was Daisy (from Chasing Daisy) who as we learn had fallen in love with Johnny and left when it all went wrong. So Meg promised herself that she would not fall in love with Johnny. With his charm and good looks,  the parties, the backstage passes, this is more difficult than she anticipated. Throw Christian Johnny’s best friend into the mix and things become interesting.  I was torn throughout the whole book Johnny or Christian. Both were equally yummy and I can see why Meg has such a hard time.

Paige has a knack for making you never want to put her books down and I definitely could not stop turning the pages. A funny, sad, heart-breaking and romantic book. 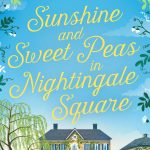 One response to “Review: Johnny Be Good”

The House on Firefly Beach by Jenny Hale