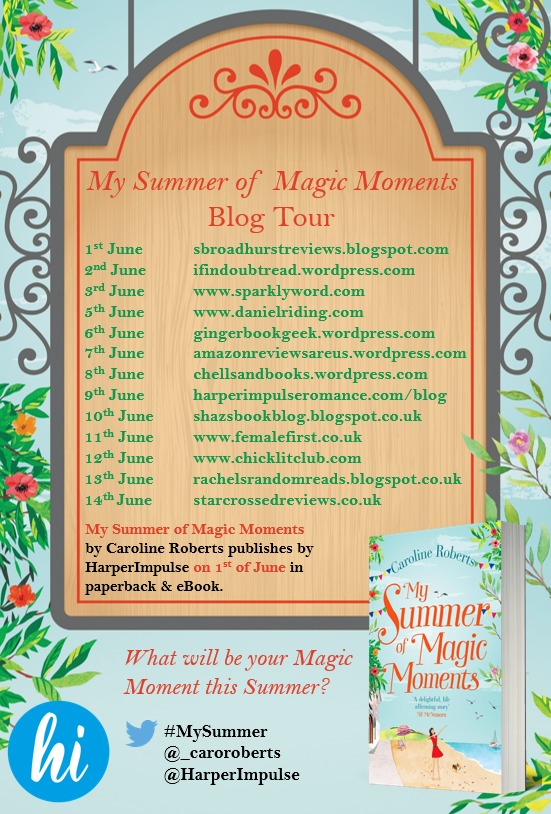 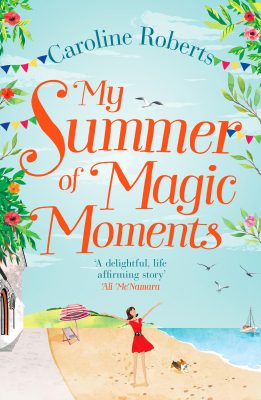 
When a seaside escape spells a little romance . . .

A heartwarming tale that will sweep you away for the summer from the bestselling author of The Cosy Teashop in the Castle.

When Claire arrives for her cosy cottage retreat on the beautiful Northumberland coast, she prays that three weeks of blissful peace and summer sunshine will wash away the pain of the last year.
Claire’s a survivor – she’s proud of the scars that prove it – and she’s determined to make the most of each and every day, to seize those little magic moments that give life its colour.

Her plan for peaceful solitude goes awry when handsome, brooding Ed turns up in the cottage next door. The last thing Claire needs is the risk of getting hurt, but she soon discovers that Ed has emotional battle scars of his own.

Will he prove the worst distraction? Or might he be just the perfect remedy?

A cup of tea and a stunning view

A thin veil of early morning pink-­grey light was suspended above the sea. The colours reminded her of the inside of a pearlized shell, subtle and beautiful. She hugged the mug of tea between her hands. Up early again – six a.m. It was a regular occurrence after the nightmare of the past year. Her mind and thoughts veered between tumul­tuous and exhausted. She’d thought she might as well get up, make her first cup of the day. At least here she could sit and enjoy a calming sea view.

What a bloody journey it had been yesterday. Not the best start to what was meant to be a relaxing break. Her car had broken down two streets from ‘home’ – she used the word loosely these days – in Newcastle­-upon-­Tyne. She’d had to get it towed back to a garage, only to find out after much tutting and shaking of heads by men in oil­-smeared boiler suits that it was never going to be fixed in an hour, or even a day, and that it was likely to cost a small fortune. So she’d had to take the metro to the main station, a train to Alnmouth, and then spend another bloody fortune – twenty-­five quid no less – on a taxi to get to her idyllic cottage by the sea, which was meant to be somewhere near Bamburgh but seemed to be in the middle of nowhere.

The idyllic cottage itself left a lot to be desired. On unlocking the peeling white­painted front door, Claire had discovered a hallway of beige woodchip wallpaper with tell­tale bubbly patches of damp. She’d come to the kitchen next, which sported basic white MDF cabinets and a cooker that looked like it had come out of the ark. She hadn’t dared to try and use it last night, settling for the sandwich she’d bought on the train and never eaten, and an apple she’d had in her bag.

She’d sat on the dark­ brown velour sofa in the lounge area, staring at a clock that had stopped, possibly several years ago, on the mantelpiece over a real fireplace. Looking around at the matching brown armchair, whose seat cushion sagged heavily, a nest of 70s ­style wooden tables and a couple of faded prints on the walls, she’d wondered where the hell she’d ended up. This was meant to be a relaxing holiday, a chance to chill-­out. And she’d booked for a whole three weeks. It was cheap, admittedly, but she hadn’t expected anything quite this basic.

She’d tried to cheer herself up. Yes, the place was a bit old­ fashioned and in need of some TLC, but maybe she was just tired. She’d had an exasperating day, after all. She decided to have an early night, so she’d tucked herself up under a handmade patchwork quilt in her upstairs double room, and told herself it would all seem better in the morning.

In the light of a June morning, it still didn’t look that promising! The whole place seemed tired, worn, and all the windows and ledges appeared to be a mass of rotten wood. The house was crumbling at the seams, and to top it all, after a hunt for the boiler and radiators to turn on against the morning chill, she’d realized it had no central heating. A cup of tea had been the only option, and now she thought she might as well head outside and get some fresh air and a sea view. She supposed she should be grateful that the balcony that led out from her upstairs bedroom was holding up.

Right, Claire Maxwell – enough moaning, you old tart. You’re here to rest and recuperate. Her mind took on a school­ marmish voice which sounded very like her mother’s. No, they hadn’t given her nearly a month off work to sit grumbling. This was the start of her new life, and she had no idea where it was going to take her. For now, it was sitting on a rickety wooden balcony on a Friday morning in June watching the sun rise over the North Sea. It was a place of calm, with a solitary gull swooping in the Carsky and a pair of black ­and ­white oyster catchers balanced on spindly legs dipping their orange beaks in the shallows.

A door slammed somewhere nearby, causing her balcony to wobble. She gripped her mug to prevent a spill. There were two stone cottages here, side by side, which fronted the beach – being isolated had been its appeal. Typical that the other was occupied, but it was the summer season. There was some guy coming out; he was probably here with his wife and a brood of noisy kids. The rest of them would be safely tucked up in bed for now, it being six a.m., but no doubt ready to shatter her peace in another hour or so.

Claire stared at the man; she had nothing better to do. He walked from his grassy square of garden straight out onto the beach.  He was tall, broad­-shouldered,  with sandy­blond hair – quite handsome, actually – wearing flip­flops, a white T­shirt and red shorts. He looked in his thirties. He began to jog straight for the sea, stopping a couple of metres before he hit the waves to slip off his footwear. Then, in one swift movement, he pulled off his T­shirt, revealing a rather gorgeous toned and lightly tanned torso. Hey, things were looking up! Another swift motion and his shorts were off. Jeez, he wasn’t wearing any Speedos beneath. The peachy whiteness of his firm buttocks and the muscular V of his back entranced her. He bent slightly to drop his clothes. Gulp. Claire leaned forward in her seat, her heart racing.

He continued his now ­naked jog down to the sea. The rear view was gorgeous, athletic. Wow! Was this real? Had she guzzled way too many glasses of wine or something last night? Was this wishful thinking, a hallucinatory dream? She really didn’t want to wake up from it if it was. She squeezed the mug in her hand – it was solid, painted a pukey­looking green colour, and the tea had a cooling milky look to it. This had to be real.

The guy  reached  the  breaking  waves, took  a  dive straight in, and there he was, bobbing up and down in the surf line. She watched him swim out to the calmer, deeper sea. He seemed a confident swimmer.

Ooh, then she realized he’d have to come back in, facing her in the buff with nuts and bolts and everything in full view. She should probably go discreetly back indoors, give him a bit of privacy.

And miss a view like that? Sod it. No! You didn’t get the chance to see a gorgeous body like that often, if ever. Her ex certainly hadn’t had a physique like this guy’s. But what if he saw her? Sitting there gawking like a perv? She’d look a bit odd, wouldn’t she – voyeuristic. But really, when was she going to get the chance to sneak a look at a body like that again? After all, she was here first. He shouldn’t be flaunting himself like that if he didn’t want a normal, warm­blooded woman looking at him.

She decided to shift her deckchair slightly back into the shadowy area of the balcony – he probably wouldn’t notice her there – and sat back down, watching his head bobbing like a seal out at sea as she smiled to herself. Well then, it wasn’t so quiet here, after all. And what was the harm, after everything she’d been through, allowing herself to watch a strong, healthy, rather hand­ some male?

Cancer had a way of doing that to you – putting things in perspective, making you realize just how precious life could be, that you needed to seize every moment – espe­cially little magic moments like seeing a gorgeous man naked. Why not? Why not indeed.

So, still holding the dregs of her tea, she leaned back in her chair and took it all in: the sea rolling and gently crashing, the smell of salt in the air, the cry of a gull, the golden warmth of June sun breaking into another day. And she watched ‘Adonis’ reappear from the waves. First his shoulders, chest, the definition of his abs, his stomach. Ooh, what was about to be revealed next? . . . and . . . Oh blimey, a brown thatch of hair. And yes, it would be cold in the North Sea, but that was still impressive. Not a bad effort at all, Mr Adonis.

Right, now behave, Claire Maxwell – get a grip on your- self and go on inside.

But if you move now, he’s bound to see you, her alter ego chipped in cheekily (this voice definitely not sounding like her mother). Her cheeks felt flushed and her heart was pumping. What if he saw her? That would make it very awkward if they met over the coming days and weeks. She could imagine the conversation:

‘Ah yes, I spotted you ogling my naked body . . . Do you make a habit of voyeurism?’

She shrank back in the chair. If she got up now, she was pretty sure he would see the movement from the balcony. Best to stay put.

He strolled towards his pile of clothes – whoa, stare, don’t stare, gulp – slipped on his shorts, the T­shirt, the flip­flops, and shook his hair out, the action reminding her of a wet dog, then jogged back, seemingly oblivious to her presence.

Claire was left with a big grin creeping across her face.

Family, friends, food, a glass of bubbly and, of course, a good book make Caroline smile. She loves writing emotional stories about love, loss, betrayal, and family that explore how complex and yet beautiful love can be. She also likes to write romantic comedy, letting the characters have a bit of fun too! Caroline believes in following your dreams, which led her here to Harper Impulse and a publishing deal after many years of writing. Stunning Northumberland is her home – sandy beaches, castles and gorgeous countryside that have inspired her writing.