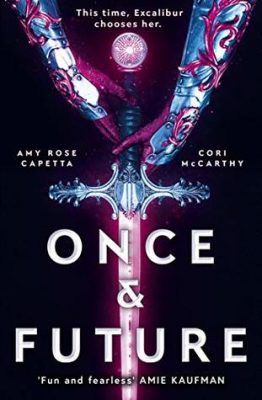 I’ve been chased my whole life. As a fugitive refugee in the territory controlled by the tyrannical Mercer corporation, I’ve always had to hide who I am. Until I found Excalibur.

My name is Ari Helix. I have a magic sword, a cranky wizard, and a revolution to start.

When Ari crash-lands on Old Earth and pulls a magic sword from its ancient resting place, she is revealed to be the newest reincarnation of King Arthur. Then she meets Merlin, who has aged backward over the centuries into a teenager, and together they must break the curse that keeps Arthur coming back. Their quest? Defeat the cruel, oppressive government and bring peace and equality to all humankind.

Thank you to Rock the boat for my copy of this book via Netgalley. I loved the cover and the blurb really sucked me in so I thought I would give this book a try.

I wouldn’t say I was totally up on King Arthur and his round table. I mean I know of the story and the whole sword in the stone thing but to be quite honest I had forgotten the majority of the story. I did look up some of the characters while I was part way through the book but I wouldn’t say it was really necessary. The relevant characters are explained in the book.

I really loved the beginning of this book. There was good world building and explanation. The characters were really fun and there was lots of humour throughout the story. I thought that the middle dipped a little. I found it difficult to get through those chapters. I really enjoyed the end of this book. there was a lot of action and it felt like it had gone back to the same tone as the beginning.

I am looking forward to the sequel and I will read it as I’m interested to see the outcome but I don’t think it will be top of my TBR pile when it does come out.

Amy Rose Capetta [she/her] is an author of YA fantasy, sci-fi, and mystery. Her first novel, Entangled, was a BEA Buzz Book and along with a sequel, Unmade, comprises a space duet. Echo After Echo, a queer love story wrapped in a murder mystery and set on Broadway, earned two starred reviews and was a Junior Library Guild Selection. The Brilliant Death, an Italian-inspired fantasy novel, also received two stars and was a chosen as a JLG selection and a Kirkus Best YA Book of the Year. Upcoming titles: Once & Future (co-written with Cori McCarthy, March 2019), The Lost Coast (May 2019) and The Storm of Life (sequel to The Brilliant Death, Fall 2019). Amy Rose holds a BA in Theater Arts from the University of California at Santa Cruz and an MFA in Writing for Children and Young Adults from VCFA. She co-founded the Rainbow Writers Workshop, the first-ever workshop for YA and middle grade LGBTQIAP writers. She lives in Vermont with her partner and their young son. 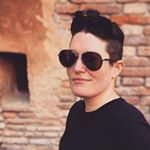 Kirkus hailed their lyrical science fiction debut The Color of Rain as “an elegantly written and emotionally cathartic page-turner.” Their futuristic thriller Breaking Sky is in development to become a major motion picture, and their contemporary You Were Here combines word art poetry, graphic novel, and prose.

Cori’s romcom Now A Major Motion Picture is, according to Kirkus, “a war cry and a love letter all at once,” and made the 2019 Amelia Bloomer list of feminist literature for children. Their novel in verse, Name Me America, won the MG category of the Katherine Paterson Prize in 2015.

Cori holds a BA and MFA in creative writing as well as a degree in screenwriting. They cofounded the annual Rainbow Writers Workshop with their partner and, like many of their characters, are a member of the LGBTQ+ community.

Cori lives in Vermont with their partner, YA author Amy Rose Capetta, and young child.

Blog Tour Review: Stuck With Him