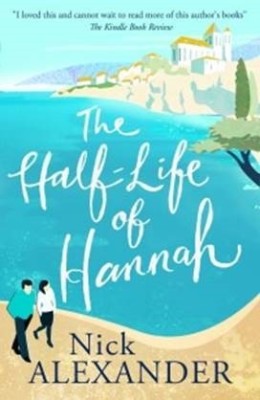 The Half Life of Hannah by Nick Alexander
Also by this author: Other Halves
Series: Hannah #1
Also in this series: Other Halves
Published by Black & White Publishing on August 2012
Genres: Chicklit, Fiction, Humour, Love & Romance
Pages: 256
Format: eARC
Source: for a Blog Tour
Goodreads
Amazon UK, Amazon US

“If your first love came back to offer you everything you ever dreamed of, what would you do?”

Hannah is thirty-eight and the happily married mother of eleven-year old Luke, the diamond in her world. Her marriage is reassuringly stable, and after fifteen years she has managed to push the wild dreams of youth from her mind and concentrate on the everyday satisfactions of here and now. The first half of her life hasn’t been as exciting as she had hoped, but then, she reckons, whose has?

When she succeeds in convincing husband Cliff to rent a villa in the south of France for a summer holiday with her sister Jill and gay friend Tristan, she’s expecting little more than a pleasant few weeks with her family. But they each have their own baggage – their own secrets – ready to explode on this not-so-relaxing holiday in France.

When a phone call at the villa announces the imminent arrival of a ghost from her past, the ambiance is transformed into a raging sea of jealousy as Hannah is forced to question everything she thought she knew and believed.

But is she brave enough to take the life-changing decisions her future happiness requires?

Today is an exciting day! We have two yes TWO blog tours!!!. The first is The Half life of Hannah and the second is Other Halves both by Nick Alexander. Thank you to Shaz for letting me take part in these tours.

I loved this book. I honestly couldn’t put it down.

I found the scenes and the story to be very realistic.  I enjoyed the typical family arguments. When you’re  the one having the arguments they are infuriating. However when you watch or read about someone else’s arguments they are entertaining and sometimes down right hilarious.

The flashback scenes were good, they provided just the right amount of back-story without giving away too much too soon.

This book had a great host of characters. Tristan was hilarious and a great BFF. Jill was a bit of a liability but she really bucked her ideas up and came through. Part of me hates Cliff and part of me just feels sorry for him.

This story will have you reeling through the emotions from laughter to worry to shock. As soon as I finished I couldn’t wait to read the sequel which, incidentally is the second blog tour today.