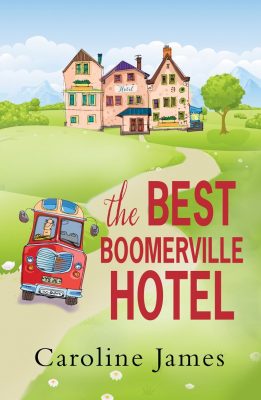 
Let the shenanigans begin at the Boomerville hotel …

Jo Docherty and Hattie Contaldo have a vision – a holiday retreat in the heart of the Lake District exclusively for guests of ‘a certain age’ wishing to stimulate both mind and body with new creative experiences. One hotel refurbishment later and the Best Boomerville Hotel is open for business!
Perhaps not surprisingly Boomerville attracts more than it’s fair share of eccentric clientele: there’s fun loving Sir Henry Mulberry and his brother Hugo; Lucinda Brown, an impoverished artist with more ego than talent; Andy Mack, a charming Porsche-driving James Bond lookalike, as well as Kate Simmons, a woman who made her fortune from an internet dating agency but still hasn’t found ‘the One’ herself.

With such an array of colourful individuals there’s bound to be laughs aplenty, but could there be tears and heartbreak too and will the residents get more than they bargained for at Boomerville?

‘Britain’s answer to the Best Marigold Hotel! Book me in for Sharing with the Shaman and Clairvoyance in mid-life – this book is fabulous!’

Caroline James was born in Cheshire and wanted to be a writer from an early age. She trained, however, in the catering trade and worked and travelled both at home and abroad. Caroline’s debut novel, Coffee Tea The Gypsy & Me shot to #3 on Amazon and was E-book of the Week in The Sun newspaper. Her second novel, So, You Think You’re A Celebrity… Chef? has been described as wickedly funny: ‘AbFab meets MasterChef in a Soap…’ The manuscript for Coffee Tea The Caribbean & Me was a Top Ten Finalist at The Write Stuff, London Book Fair 2015 and the judge’s comments included: “Caroline is a natural story-teller with a gift for humour in her writing.” Her next novel, Coffee Tea The Boomers & Me will be published autumn 2016.
Caroline has owned and run many catering related businesses and cookery is a passion alongside her writing, combining the two with her love of the hospitality industry and romantic fiction. As a media agent, Caroline represented many well-known celebrity chefs and is currently writing a TV script and accompanying book about the life of a well-known chef. She has published short stories and is a member of the RNA and The Society of Authors. Caroline writes articles on food and celebrity based interviews and is Feature Editor for an online lifestyle magazine. When she’s not running her hospitality business and writing, Caroline can generally be found with her nose in a book and her hand in a box of chocolates, she also likes to climb mountains and contemplate life.