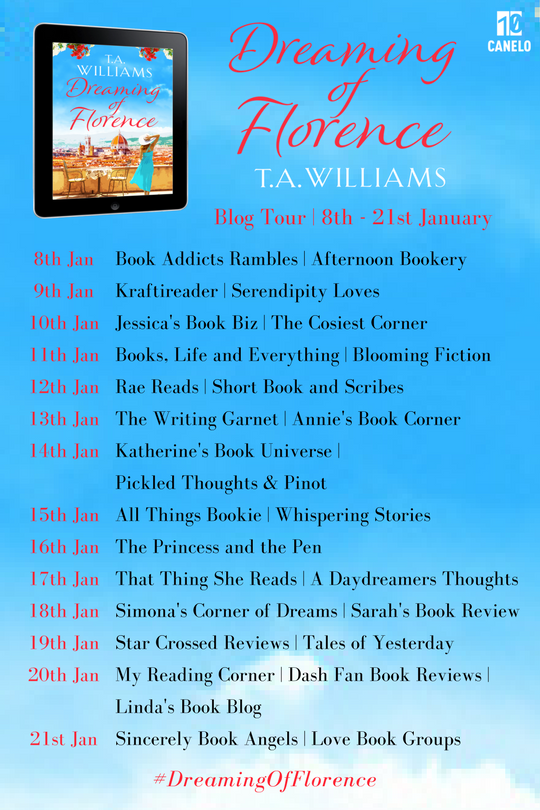 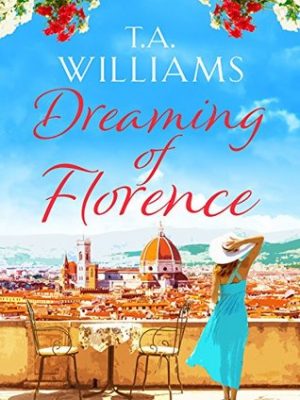 When Debbie Waterson’s bicycle crashes into handsome doctor Pierluigi, she wonders if her luck has changed. Determinedly single after ending a long relationship, at last, a man worth bumping into!

Inspired to visit Florence, she soon runs headlong into that old foe: reality. But is Pierluigi the man of her dreams? Then there’s her booze obsessed boss, his forbidding secretary and her noisy inconsiderate neighbours. But could her luck be about to change? Will she find love after all?

Warm-hearted and unputdownable, Dreaming of Florence is the perfect escape for readers of Holly Martin, Tilly Tennant and Jenny Oliver

As Flora was explaining, Debbie began to get the impression that she was being watched. She turned towards the door and saw Barbara’s eyes on her, giving her a close and clinical examination.

‘Flora, your friend here… Deborah, she looks like a pretty perfect 40 to me.’

Flora nodded. ‘And to me. Deborah, what size are you in the UK?’

Debbie swallowed hard. She was beginning to realise where Barbara might be going with this.

Flora already had. ‘Tell me, Deborah, have you ever done any modelling?’

Debbie blinked and then found herself giggling. The idea was so preposterous.

‘Why not? You’re very beautiful, you’re tall, and I love your long hair.’ Debbie saw Barbara and Flora exchange glances. ‘Anyway, look, are you busy for the next hour or so?’

Debbie shook her head, still refusing to believe what appeared to be happening. ‘No, but…’

‘Would you be prepared to help us out by hanging around here for a bit? It could be they won’t want to see any of the items on a model, but just in case.’ Flora caught Debbie’s eye. ‘You’d be doing us a great favour.’

‘I really don’t know…’ Debbie was in a quandary. On the one hand, she knew she owed Flora a lot and wanted to help her but, on the other, the idea of standing around, posing, while people stared at her was very, very scary.

‘They may be quite happy just seeing the dresses on hangers.’ Barbara was doing her best to sound encouraging. ‘You may not need to do anything.’

Taking a deep breath, Debbie nodded, blessing the instinct that had made her put on the new underwear she had bought only last week.

‘Of course I’ll help out, and I’ll do my best. I just hope your lovely clothes look good on me.’

The next hour was without doubt one of the most stressful of Debbie’s life. In comparison, being observed by a British Council inspector as she did her best to make an assorted group of septuagenarians understand the difference between the Present Perfect and the Present Perfect Continuous tenses was as nothing.

The American contingent was composed of three stern-faced ladies and they definitely wanted to see a number of items modelled by Debbie. Fortunately, it turned out that she was, as Barbara had predicted, a pretty perfect size 40, and even she herself had to admit that some of the stuff looked really good on her. In all, she had to leap behind the screens and change into eleven separate dresses in the space of less than half an hour. By the end of the session, she was flushed and perspiring.

As Barbara led the ladies out of the room and downstairs to Giacomo and the Mercedes to take them back to the station, Flora came round to give Debbie the good news.

‘They loved the new collection and they loved you, Debbie. You were marvellous. Thank you so very much. You really did us a huge favour.’

‘Thank goodness for that. I’ve never been so terrified in all my life.’

‘Tell that to my antiperspirant.’ 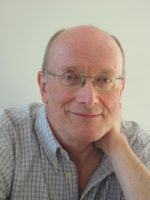 Book News: Beneath the Moon and the Stars Chapter 2 Reveal
July and August Wrap Up and BOTM 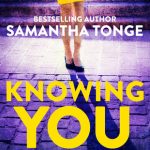 One response to “Blog Tour: Dreaming of Florence”