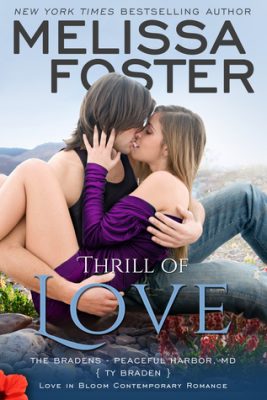 Thrill of Love by Melissa Foster
Also by this author: Sisters in Love, Lovers At Heart, Destined For Love, Friendship on Fire
Series: The Bradens at Peaceful Harbor #6
Also in this series: Healed By Love, Surrender My Love, River of Love, Crushing on Love
Published by World Literary Press on 4th October 2017
Pages: 296
Goodreads
Amazon Kindle, Audible

Fall in love with Ty Braden and Aiyla Bell in this epic love story.Fate brings them together, but will tragedy tear them apart?

Do you believe in fate?
World-renowned mountain climber and nature photographer Ty Braden never believed in second dates, much less heart-pounding, steal-his-breath love. But that was before a trip to Saint-Luc, where he met funny, strong, and entrancingly beautiful Aiyla Bell, a ski instructor and fellow photographer whose hopes and dreams, and love of the outdoors, aligned perfectly with his–and whose kisses alone turned him inside out.

After spending five magical days and four sweet, soulful nights falling in love, Aiyla couldn’t imagine a day without Ty. But when he asked her to go with him on his next assignment, his reputation for having women at his beck and call stopped her from upending the life she’d worked so hard to create.

Months later fate steps in when a chance encounter brings Ty and Aiyla together for a five-day wilderness event held in the Colorado Mountains. Their deep, passionate connection is stronger than ever, and Ty is bound and determined not to lose her again. But when tragedy strikes and their worlds are turned upside down, their love faces the truest test of all.

Thank you to Lisa for letting me take part in this tour. The Braden’s have had a special place in my heart for a long time so I had to sign up to the last Braden’s at Peaceful Harbor tour.

Ty has watched all his brothers and sisters fall in love. They fell hard and fast and when he met Aiyla Bell he finally understood. Ty has never been the monogamous type. He’s not a cheater but he’s just never met a girl he wanted to be serious with. That was before he met Aiyla.

Aiyla has been careful with her heart since she was 15. She has the perfect life and she wasn’t going to ruin it for a man who has a reputation a mile long. But when Aiyla see Ty again at the Mad Prix she knows that fate is stepping in.

While Melissa’s books are not all fluffy, and they do tend to deal with some serious real world issues, what Ty and Aiyla go through is definitely one of the hardest things anyone will experience. I think this will touch a lot of readers as it is something that a lot of people will be able to identify with in some way. You may need some tissues from about halfway to 60% of the way in pretty much until the end.

I stayed up late into the night reading this as I had to find out what happened and Melissa did not disappoint. I think that Ty and Aiyla may have knocked Josh and Riley off my top spot. This is definitely my new favourite book by Melissa.

Do you believe in fate?”

His warm breath coasted over her cheek, and she swallowed hard, paralyzed by the sound of the deep, seductive voice she’d heard in her dreams so many times she wasn’t sure it was real. Her heart thundered against her ribs, and she forced her shaky legs to work. She turned, both of them rising at the same time, bringing all six-plus broad, muscular, feet of Ty Braden into focus. Oh God. It’s really you. His silky brown hair was in desperate need of a trim, stopping just short of his shoulders and framing his rugged features. The mix of longing and shock in his golden-brown eyes unearthed a storm of memories—her hand in his, his lips on hers, deep conversations as they shared their hopes and dreams, which were as perfectly aligned as the stars in the skies of Saint-Luc.

“Ty” came out ridiculously breathless. She wanted to scale him like a mountain, to kiss his hot, sensuous mouth again and feel him holding her as he once had. But she couldn’t do any of those things. She was frozen in place, and that was probably a good thing. He was still Ty Braden, the world-renowned mountain climber and photographer, with a reputation as a player that preceded him.

In an effort to regain control, she shifted her gaze away and managed, “What are you doing here?”

“It’s fate,” he said confidently, as if he believed in it. “Fate has brought us together for another five days.”

She forced herself to meet his gaze, her heart thundering at the prospect of more time with him. “You don’t believe in fate, remember? You believe people are in charge of their own destiny.” Their last night in Switzerland, he’d asked her to leave with him the next day and travel with him “to see where things end up.” Oh, how she’d wanted to throw caution to the wind and join him. But she’d worked years to build the life she had always dreamed of, and she couldn’t risk it all to be one in a long line of Ty’s women. She’d fallen hard for him—fallen in love with him—and she hadn’t been able to bring herself to confront the rumors about his reputation. Instead, she’d said, Do you believe in fate? And though he’d said he didn’t, she always had, and she’d said, if this is meant to be, we’ll meet up again. They’d agreed not to exchange phone numbers or addresses, and not to track each other down by any other means, but to truly leave their future in fate’s hands.

“I think that’s changed, Aiyla.” He said her name like he’d been waiting to say it for all these months. He stepped closer, so close she could smell something minty on his breath. “I can’t believe you’re here. After all this time, you’re really here.”

The longing in his voice confused her even more. She looked into his eyes, and memories swamped her. She remembered the feel of him holding her in his arms as they fell asleep fully clothed and waking to his sweet whispers and gentle kisses. Cuddling under blankets as snow fell around them and they reminisced about their childhoods and families. She felt like she already knew his five siblings, though she’d never met them. A lump rose in her throat, and she shifted her gaze over his shoulder to try to regain control. Two female competitors were whispering and watching them. Her stomach knotted again. Why did the only guy she’d ever fallen for have to come with a womanizing reputation? He hadn’t seemed like a player in Saint-Luc. He hadn’t even tried to sleep with her until that very last night, when she knew he’d been picking up on all of her sexy signals. Signals she’d then dashed with one sentence. She’d been seconds from going back to his hotel room when he’d stepped away to answer a call. The brief moments it had taken him had given her a chance to clear the lust from her head enough to make a more rational decision. He probably thought she was a cocktease, but it wasn’t merely sex she’d been avoiding. She’d thought she was saving her heart. And she’d regretted that decision ever since. 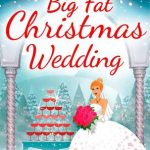 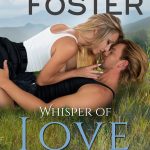 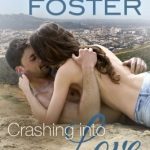 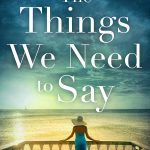 Book News: The Things we need to say Release Day