Christmas Day – where to save and when to spend

Christmas Day is THE pinnacle of Christmas. It’s that one day we spend about two months getting ready for and, let’s face it, it can get expensive. So here’s my top tips for where to save money and where it’s better to spend that little bit more!

Now the scent of a real tree is lovely but don’t forget all those dropping pine needles! Real trees can be so expensive and only last a couple of weeks (if that). Fake trees are cheaper, they last for years and they don’t smell!

First of all, do you need a whole one? If it’s just the two of you or a small family and you’re not Nigella whipping up the leftovers into Coronation Turkey or Turkey Tikka Masala on Boxing Day and beyond, consider something more cost effective. Have you seen the size of turkey legs for example? Or how about chicken breasts? A whole bird can blow your budget and if you’re going to end up throwing half of it away it seems wasteful.

Buy early! January the year before if you can! The sending of Christmas cards has lessened in the past few years because of the quality of e-cards and the growing access to Facebook etc. and Christmas cards can be costly. Buying early and buying in bulk (3 for 2 etc.) is the best way and any excess you have can be used for next year. Or how about combining a donation to charity by picking cards that give to a worthy cause.

I love a good Christmas cracker and I really don’t want another plastic spinning top, fake moustache or fortune-telling fish. I want something useful. I think, particularly if you have guests for Christmas dinner, it’s nice to have a decent cracker that acts as a little gift all of its own. You don’t have to spend a fortune but a mini torch, screwdriver set, bottle opener etc. will be more use to you in the New Year than a Chinese puzzle.

So I’ve got you saving on cards but one thing I think you should shell out a little on is wrapping paper. I’ve learnt that buying ten sheets for £1 isn’t the best option and will probably mean there are corners of presents ripping through the paper before the big day. Making your present look nice in shiny, glittery paper shouts luxury before the receiver has even ripped off the Sellotape.

This is the most important thing about the Christmas holidays and it’s free! Not everyone gets lots of time off over the break so make sure you spend quality time with your friends and family. Gather around your fake tree with your beautifully wrapped gifts and your luxurious crackers, gaze at your bargain Christmas cards and smell those turkey legs cooking in the oven! Time together is the best gift of all. Have a good one everyone! 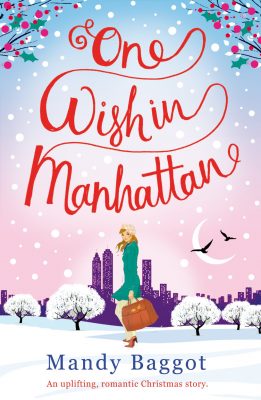 It’s the most wonderful time of the year… to fall in love
The temperature is dropping, snow is on its way and Hayley Walker is heading for New York with one wish on her mind…to start over.
With her nine year-old daughter Angel, Hayley is ready for an adventure. From hot chocolates and horse-drawn carriage rides in Central Park, to ice-skating at the Rockefeller Centre, and Christmas shopping on 5th Avenue – they soon fall in love with the city that never sleeps.
But there’s more to New York than the bright twinkly lights and breathtaking skyscrapers. Angel has a Christmas wish of her own – to find her real dad.
While Hayley tries to fufil her daughter’s wish, she crosses paths with Billionaire Oliver Drummond. Restless and bored with fast living, there’s something intriguing about him that has Hayley hooked.
Determined to make her daughter’s dream come true, can Hayley dare to think her own dreams might turn into reality – could A New York Christmas turn into a New York Forever?
Travel to the Big Apple this Christmas and join Hayley and Oliver as they both realise that life isn’t just about filling the minutes…it’s about making every moment count.

Angel opened the car door, slipping out and stepping up to the metal and wire barrier. Hayley heard the ‘wow’ before her daughter’s feet even hit the snow-covered tarmac. She followed Dean and Angel out of the car and joined them at the edge of the bridge.

And there was that view. Straight out of the movies. A scene so well-known but so completely different when you saw it for real, when it was that close.

High-rise buildings towered up from the banks of the Hudson River, shards of light bouncing off the water, reflecting in the ripples of the tide. Squares of yellow and rectangles of orange and white lights came from the tall, slim blocks across the river. Firm, foreboding but somehow also welcoming. Snow speckled the view, large, slow-moving flakes drifting in the breeze.

‘Which is the highest building, Uncle Dean?’

Hayley looked to Angel. She had her feet up on the first rung of the metalwork, leaning out, but her brother was directly behind her, his body close, his arms holding Angel steady. Snowflakes were settling on their hair. There were moments, like this one, where she saw elements of Michel in her daughter. It was something about her profile, the shape of her nose and definitely her eyes. Hayley continued to watch Angel with Dean. One night ten years ago had never mattered more than it did now.

‘That’s the One World Trade Centre. It stands at one thousand seven hundred and seventy six feet and has a hundred and four floors.’

‘See, it’s there,’ Dean said, pointing across the water.

‘How many steps does it have?’ Hayley asked.

‘I don’t know that, but I do know it has elevators,’ Dean responded, grinning at her.

‘Mum didn’t really want to know. She was trying to be funny,’ Angel told him.

‘I know, Angel. She did it all the time when we were growing up.’ He tickled Angel’s ribs until she had to jump back down onto the road. ‘So, are you hungry?’

‘I am. We had chicken on the plane but that was hours ago,’ Angel answered.

‘How about Chinese? I know this great little restaurant,’ Dean suggested.

‘Oh, we don’t need to go out anywhere,’ Hayley began.

‘Well, why don’t you hop back in the car and we’ll go and get us some dim sum and fortune cookies,’ Dean said, opening the door for Angel.

Once the excited nine-year-old was back in the car Hayley let out a sigh that had her shoulders rolling. She clutched hold of the ironwork of the bridge but quickly let go as her fingers froze.

‘Are you going to tell me what’s wrong?’ Dean asked, putting a hand on her shoulder.

She hadn’t known her brother was so close. The comfort almost brought tears to her eyes and she realised in that moment just how much she missed him. He’d been here, in New York, since she was seventeen and only now did she grasp just how much that had challenged her. He was her big brother, the only one who had never judged or asked too many questions.

She forced a smile but she wasn’t sure it had met her eyes. ‘I’m fine.’ How could she even begin to tell him everything that was wrong? It was easier this way.

He shook his head. ‘Come on, Hay, you’ve never been able to lie to me since the day you hid your Barbie’s dresses just so I couldn’t put them on Action Man.’

She couldn’t help the laugh escaping. ‘I didn’t understand back then.’

She looked her brother up and down. Brown brogue shoes, dark blue designer jeans, clean shaven, with his short brown hair gelled up to perfection. His blue knit coat was collecting snowflakes and it was almost exactly like the last time she was here. Younger, more excited, but still vulnerable.

‘What is it?’ Dean said in no more than a whisper.

Hayley shook her head and forced a smile. It wasn’t the right time. She wanted to be closer to having answers, find a trail and be heading towards a result before she let anyone in on it. ‘It’s so good to see you.’

And then her cheeks hit the wool of Dean’s coat and the flakes of white mushed up against her skin as he embraced her hard. She breathed in the scent of his cologne, savouring all the memories it brought back. Fun, laughter, simple, uncomplicated times.

‘You’re in New York, Hay! New York! My adopted home town! And it’s Christmas time!’ Dean swung her about in his arms like she was a fabric doll. Then he held her away from him, hands planted on the side of her reddened cheeks as he swayed her head from side to side. ‘I have a whole list of things for us to do. We’re going to finally get you in a horse and cart. We’re going to go skating at the Rockefeller Centre. Vern is going to get us tickets for something on Broadway.’ An ecstatic sigh left him. ‘It’s going to be the best two weeks of your life!’

Hayley took back control of her head. ‘Who’s Vern?’

For a second the wind was taken out of Dean’s sails but then he laughed and clamped a hand on her shoulder. ‘Nice try. Your daughter never keeps anything secret. She must have told you about Vern.’

Hayley smiled. ‘She might have. But I definitely need to know more about Randy. Please tell me it’s a dog and not a pet name.’ 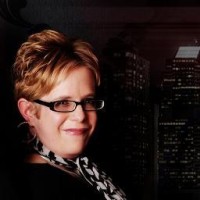 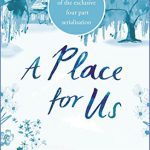