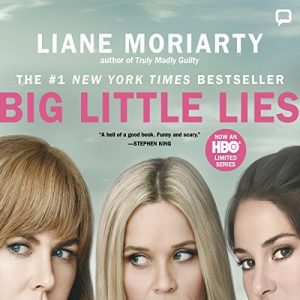 Big Little Lies follows three women, each at a crossroads:

Madeline is a force to be reckoned with. She’s funny and biting, passionate, she remembers everything and forgives no one. Her ex-husband and his yogi new wife have moved into her beloved beachside community, and their daughter is in the same kindergarten class as Madeline’s youngest (how is this possible?). And to top it all off, Madeline’s teenage daughter seems to be choosing Madeline’s ex-husband over her. (How. Is. This. Possible?).

Celeste is the kind of beautiful woman who makes the world stop and stare. While she may seem a bit flustered at times, who wouldn’t be, with those rambunctious twin boys? Now that the boys are starting school, Celeste and her husband look set to become the king and queen of the school parent body. But royalty often comes at a price, and Celeste is grappling with how much more she is willing to pay.

New to town, single mom Jane is so young that another mother mistakes her for the nanny. Jane is sad beyond her years and harbors secret doubts about her son. But why? While Madeline and Celeste soon take Jane under their wing, none of them realizes how the arrival of Jane and her inscrutable little boy will affect them all.

Big Little Lies is a brilliant take on ex-husbands and second wives, mothers and daughters, schoolyard scandal, and the dangerous little lies we tell ourselves just to survive.

Thank you to Michael Joseph for my NetGalley copy of this book. I actually borrowed the audiobook from my library. I have previously read one of Liane’s books and I know that this book was made into a TV series that has had very good reviews. but before I watched it I wanted to read the book.

This is one of those books where you can’t stop talking about it but at the same time, you don’t want to spoil the story. There are many secrets in this book and I love the way that they unfolded.

This story follows three women Madeleine, Celeste and Jane. Jane is new to the area and meets friends Madeline and Celeste. The three women have children starting kindergarten at the same school. These three women are very different but have some common ground. Madeleine is an easy person to like and instantly became my favourite. She’s bubbly and loves to be involved. I found quite Celeste frustrating at times. Jane, I just wanted to hug her and tell her it was all okay.

The beginning of the book is actually the end. we flick from the end to the beginning and regularly get fed more mystery from after the ‘event’ through statements. I really liked this method. I love it when books do something. different like this.

This book is addictive and gripping I can see why it got picked up for a TV series. If you like a bit of mystery, playground politics and a shocking ending then pick this book up now.

Liane was born on a beautiful November day in 1966 in Sydney. A few hours after she was born, she smiled directly at her father through the nursery glass window, which is remarkable, seeing as most babies can’t even focus their eyes at that age.

Her first word was ‘glug’. This was faithfully recorded in the baby book kept by her mother. (As the eldest of six children, Liane was the only one to get a baby book so she likes to refer to it often.)

As a child, she loved to read, so much so that school friends would cruelly hide their books when she came to play. She still doesn’t know how to go to sleep at night without first reading a novel for a very long time in a very hot bath.

She can’t remember the first story she ever wrote, but she does remember her first publishing deal. Her father ‘commissioned’ her to write a novel for him and paid her an advance of $1.00. She wrote a three volume epic called, ‘The Mystery of Dead Man’s Island’

After leaving school, Liane began a career in advertising and marketing. She became quite corporate for a while and wore suits and worried a lot about the size of her office. She eventually left her position as marketing manager of a legal publishing company to run her own (not especially successful) business called The Little Ad Agency. After that she worked as (a more successful, thankfully) freelance advertising copywriter, writing everything from websites and TV commercials to the back of the Sultana Bran box.

She also wrote short stories and many first chapters of novels that didn’t go any further. The problem was that she didn’t actually believe that real people had novels published. Then one day she found out that they did, when her younger sister Jaclyn Moriarty called to say that her (brilliant, hilarious, award-winning) novel, Feeling Sorry for Celia was about to be published.

In a fever of sibling rivalry, Liane rushed to the computer and wrote a children’s book called The Animal Olympics, which went on to be enthusiastically rejected by every publisher in Australia.

She calmed down and enrolled in a Masters degree at Macquarie University in Sydney. As part of that degree, she wrote her first novel, Three Wishes. It was accepted by the lovely people at Pan Macmillan and went on to be published around the world. (Her latest books are published by the equally lovely people at Penguin in both the US and the UK)

Since then she has written two more novels for adults, as well as a series of books for children.

Liane is now a full-time author. She lives in Sydney with her husband, her new baby daughter Anna, and her son George, who likes to sit on her lap while she works, helpfully smashing his fist against the keyboard and suggesting that she might prefer to be watching the Wiggles instead.

Once upon a time she went heli-skiing and skydiving* and scuba diving. These days she goes to the park and ‘Gymbaroo’ and sings ‘I’m a Little Cuckoo Clock’ at swimming lessons. She has discovered that the adrenaline burst you experience from jumping out of a plane is remarkably similar to the one you get when your toddler makes a run for it in a busy car park

Review: You Don’t Have to Say You Love Me