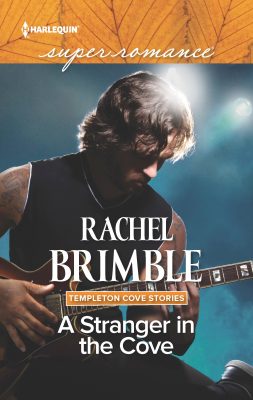 
Mac Orman is on a mission. When he discovers his recently deceased father had been searching for his birth mother, Mac aims to finish the job by finding the grandmother he never knew. His quest leads him to Templeton Cove—and a firecracker of a woman who instantly jump-starts his tortured heart.

For Mac, Kate Harrington is the most tempting kind of distraction. But their sizzling connection comes with a side of suspicion for Kate, who doesn’t trust this brooding stranger in her town. Mac arrived with no plans to stay, but as he falls for Kate, he wonders how he could ever possibly leave.

Oh, for the love of God. The man’s smile was slow, soft and as sexy as hell. It was like an invisible aphrodisiac on her newly ignited libido. She took another sip of her drink, her heart  racing and her body on fire. He looked at her as though he had X-ray vision…or the ability to make her want to strip without the request even passing his lips. Every inch of her body was intensely aware of him and she didn’t like it. Not one tiny bit. Good looks and even better bodies were not to be trusted. This guy could be just as much of a cheater as her ex. Even more so, if his killer smile was anything to go by. She couldn’t imagine a woman not being affected by it. So why did she want to keep looking at him?

He leaned his elbow on the bar and faced her. “So…” He took a sip of his drink. “Do you

Feigning nonchalance, she sat straighter on her stool and drew forth as much of a welcome attitude as she could. It wasn’t this stranger’s fault he’d attracted and intrigued her in one very dangerous blow. “Yes.”

“That’s all you get.” She returned his smile, her body relaxing a little. His voice was rich

and deep and had the same warming effect on her as a shot of whiskey on a cold night. “That is, until I know a little more about you.”

“Okay…” Her gaze dropped frustratingly to his mouth, most likely quashing her

nonchalance in a heartbeat. She shifted on her seat and lifted her gaze to his…although his eyes were by no means a safer option. She cleared her throat. “What brings you to the Cove?”

His gaze locked on hers and the seconds ticked by. His blue eyes darkened as his smile

faltered.  Kate raised her eyebrows, curiosity whispering through her. “Was that not a good

question to start with?”

He flitted his focus to the band once more. “I’m looking for work.”

She frowned. “In Templeton?”

She hazarded a guess that the shift in his tone was meant to induce a throw away question, to make her believe it was no big deal why he was in Templeton. Little did Mr. Bad Boy know, she was blessed—or sometimes cursed—with the innate ability to read between the lines, to sense when something wasn’t quite right with people or situations. Her senses pinged to high alert with this guy at the sudden stiffness in his body, the way his jaw had set. His easy demeanour of a moment before had been replaced with clear defensiveness. 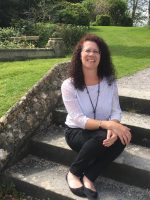 Rachel lives with her husband and two teenage daughters in a small town near Bath in the UK. After having several novels published by small US presses, she secured agent representation in 2011. Since 2013, she has had seven books published by Harlequin Superromance (Templeton Cove Stories) and an eighth coming in Jan 2018. She also has four Victorian romances with eKensington/Lyrical Press.
Rachel is a member of the Romantic Novelists Association and Romance Writers of America, and was selected to mentor the Superromance finalist of So You Think You Can Write 2014 contest. When she isn’t writing, you’ll find Rachel with her head in a book or walking the beautiful English countryside with her family. Her dream place to live is Bourton-on-the-Water in South West England.
She likes nothing more than connecting and chatting with her readers and fellow romance writers. Rachel would love to hear from you!