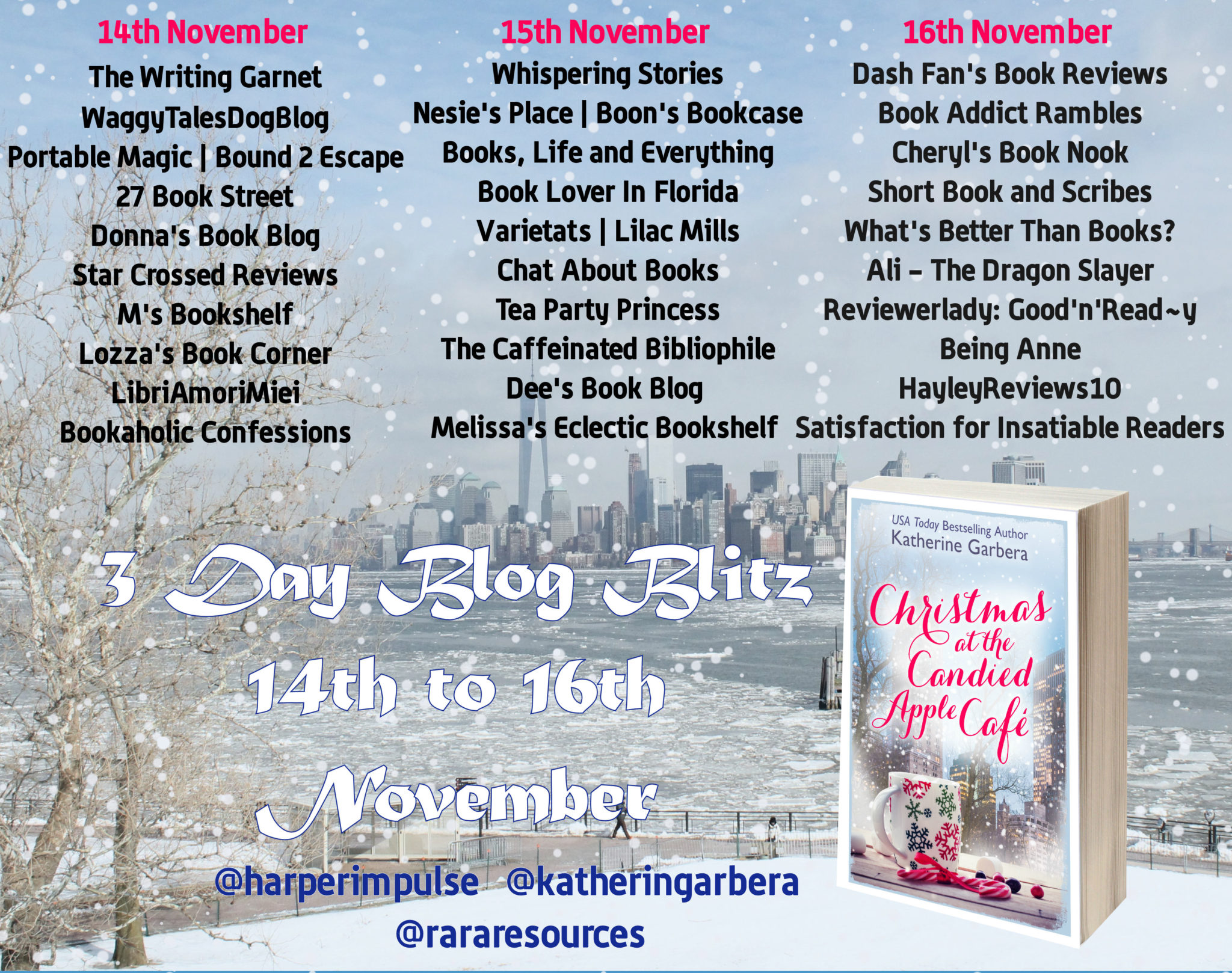 Happy Tuesday everyone. For today’s #TuesdayTreat I am joined by Katherine Garbera!

So Katherine, can you tell us a little about you?

Let’s see, I’m a Florida-Girl living in the midlands of the UK with my family and a very spoiled miniature dachshund named Godiva.  I started writing when I was in my twenties and have been lucky enough to have made it my career. I’m a bookworm, lover of coffee, tea and wine, and love to travel.  I feel very blessed to be living such a wonderful life.

So your new book Christmas at the Candied Apple Cafe has just been released can you summarise the story?

Christmas At The Candied Apple Café is a holiday story that has all the feels of a Christmas and the magic that the season brings.  It’s set in Manhattan and the city plays an important part in it.  Iona is the PR director for the Candied Apple Café and she knows how to create the perfect images in the storefront windows of the best Christmas but creating that in her life is a bit harder until she meets Mads and his adorable daughter Sofia.

What can you tells us about about the characters in this book?

Iona Summerlin was never the favored child in her father’s eyes.  He thought she should just be pretty and on a man’s arm but Iona has always known that’s not the path for her.  Despite the fact that he died a little over a year ago, she’s still working hard, trying to prove she’s as smart and successful as he was.

Mads Eriksson doesn’t hate Christmas but it’s not his favorite time of year.  The single-father lost his wife during the holiday season and he’s trying his best to make this year a good one for his six-year-old daughter.

Sofia Eriksson a precocious six-year-old who doesn’t believe in Santa or miracles.

Ok, so now its about to get a little bit personal…

My favorite place to write is at my desk in my home office.  I have a large window that overlooks our back yard.  I’m surrounded by photos of the people I love, little notes my husband and kids have left for me on my monitor over the years.

First, would be The Scarlet Pimpernel by Baroness Orczy: I love this book for the adventure and romance and the fact that it was written by a woman in a time when women authors were struggling to find publication.  It’s simply one of my favorites.

Second, Heaven, Texas by Susan E. Phillips.  I love this book so much, the hero is so arrogant yet loveable and the heroien so relatable. Every time I read it, even though I know what is going to happen, I laugh until I cry and then at the black moment I cry because Bobby Tom Denton is so dumb when it comes to realizing how much he is in love.  I just adore this book.

Third, The Lord Of The Rings by Tolkein. I love the bonds of brotherhood and fraternity in the book, plus the good struggling to over come evil. I have to admit I do skip the part where Sam/Frodo and Gollem are journeying to Mordor. It just gets long and tedious! But I love Boromir and his struggle with his father.  I love the Riders of Rohan.

All of them! I really like the changing of the seasons, growing up in Florida most of the year I wore flipflops and shorts so I love living in a place where the seasons change. 🙂

Who is your favourite author and why?

Margaret Atwood and Jayne Ann Krentz are my favorite authors.  Margaret Atwood writes characters that have a strong sense of purpose and of self as does Jayne Ann Krentz.  What I love about Krentz’s books is how both the hero and heroine in the romance have to sacrifice, it’s not just the man giving up something for the woman or vice versa.  They are always strong characters with something broken inside of them but on the outside they seem normal.

Yes they have.  Margaret Atwood’s book The Edible Woman influenced how I look at the writer’s tool of point-of-view.  In that book it starts in first person and as the protagonist starts to lose her sense of self, the point-of-view switches to third and she struggles with seeing herself as a woman, she’s more observing her life and then when the heroine resolves her conflict it goes back to first person.  This made me look at point-of-view and realize how much power it has on the reader.  When I’m writing I always think about how the impact of changing viewpoint.  Sometimes as a reader a scene will resonate more if we are seeing the character with the most to lose from another person’s viewpoint.

Jayne Ann Krentz influenced the way I tell romance stories.  Her books have always been some of my favorites and as I mentioned above I love the way that there isn’t a loser in the romance.  No one has to give up everything for the other person.  They both give up something in their single lives to make a new joined life together.  Another thing I’ve taken from her books is that each characters has a strong moral compass. It might be that that moral compass lines up with the law but it might not.  And they always live by their code.

The illusion of being in control.  I have had some up and downs in my life like everyone does but when I come to the page to write it’s my own world. There are problems but I can deal with them and resolve them unlike real life.

I hate revising.  I would rather write an entire novel than revise one scene. It just feels like hard work and I know that it is you have to change the focus of the scene or maybe reorder things and I don’t like it.  I do it, of course, but I don’t like it!

I have a few.  The first is A Wrinkle In Time by Madeline L’Engle. Actually I love all four books in the series.  This story resonated with me because the main protagonist was a girl and the eldest sibling (like myself) and she felt like oddball in her family—also something I could relate to. I really love these books and still reread them. 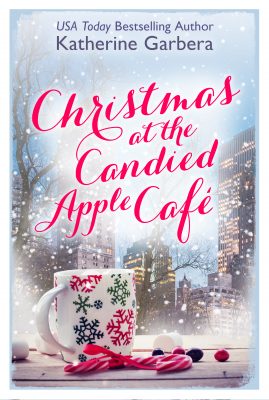 
There’s nothing so magical as Christmas in New York…

Santa is coming to New York!

Snow is falling, excitement is high and the delicious scent of chocolate drifts along Fifth Avenue – the Candied Apple Café is ready for Christmas! And no one is busier than publicist Iona Summerlin. With so much to do, she doesn’t have time to think about men, dating, or the fact her last boyfriend ditched her for her brother… Relationships are off the menu!
Hotel boss Mads Eriksson is not looking forward to the first Christmas since losing his wife. His six-year-old daughter Sofia has lost her belief in Christmas magic along with her mother, and he has no idea what to do. But an unusually festive business meeting at the Candied Apple – and meeting the beautiful Iona – starts to defrost Mads’ frozen heart, and suddenly life seems full of light and sparkle again.

If only they dare to believe, maybe all their Christmas dreams will come true! 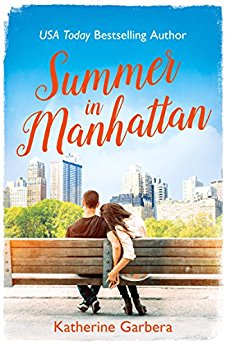 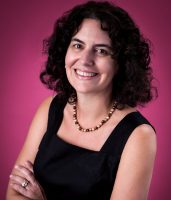 USA Today bestselling author Katherine Garbera is a two-time Maggie winner who has written more than 60 books. A Florida native who grew up to travel the globe, Katherine now makes her home in the Midlands of the UK with her husband, two children and a very spoiled miniature dachshund.

One response to “Blog Tour: Christmas at the Candied Apple Café”