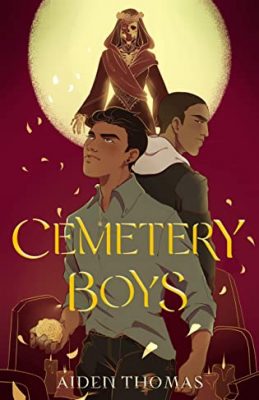 Yadriel has summoned a ghost, and now he can’t get rid of him.
When his traditional Latinx family has problems accepting his gender, Yadriel becomes determined to prove himself a real brujo. With the help of his cousin and best friend Maritza, he performs the ritual himself, and then sets out to find the ghost of his murdered cousin and set it free.
However, the ghost he summons is actually Julian Diaz, the school’s resident bad boy, and Julian is not about to go quietly into death. He’s determined to find out what happened and tie up some loose ends before he leaves. Left with no choice, Yadriel agrees to help Julian, so that they can both get what they want. But the longer Yadriel spends with Julian, the less he wants to let him leave.

I read this book during Pride month as a book club read with some work colleagues. This book was an interesting mix of magic and mystery. The big themes in this book are being different and not being accepted for them.

Our main character, Yadriel is a gay trans teenager. His family do not accept his gender and will not let him become a brujo like all the other males in the family. Yadriel is a great MC. I really enjoyed seeing the world through his eyes.

Maritza was my favourite character. I like that she doesn’t care about what others think. She is happy wth who she is and will not back down to please others.

As well as the themes of acceptance this book is beautifully romantic. It’s so sweet and real. It’s one of those that give you a warm glow.

I really enjoyed the writing style in this book and I look forward to reading more from Aiden. 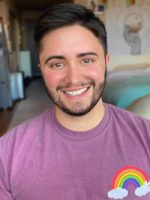 Aiden Thomas is a New York Times Bestselling author with an MFA in Creative Writing. Originally from Oakland, California, they now make their home in Portland, Oregon. As a queer, trans, Latinx, Aiden advocates strongly for diverse representation in all media. Aiden’s special talents include: quoting The Office, finishing sentences with “is my FAVORITE”, and killing spiders. Aiden is notorious for not being able to guess the endings of books and movies and organizes their bookshelves by color.

Their debut novel, CEMETERY BOYS, was published on September 1st, 2020.