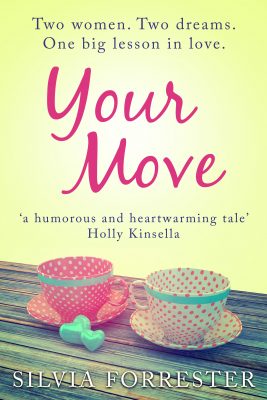 With a passion for people and property, nothing gives newbie estate agent Gemma Cole more pleasure than matching buyers with their ideal homes. After a nomadic childhood with her ditzy mum, Gemma longs for nothing more than a place she can call her own. But with one modest income and meagre savings, will she ever be able to make her own home-owning dream come true?

When Marcus, the new photographer, arrives at the estate agency, he’s the epitome of laidback, festival chic. Sexy, laidback, festival chic. But Gemma dismisses him as another commitment-phobic, eternal student, just like her ex. However, looks can be deceptive. Marcus is reeling from a shocking family tragedy, one that’s left him as sole carer for an eight-year-old boy, as well as his scruffy dog. Will Gemma revise her opinion of Marcus, and will he trust her enough to reveal his family’s painful past?

Pandora works at Perfect 10, a premier beauty and cosmetic clinic. Always effortlessly glamorous – with model-looks, bucket loads of confidence and bulging designer wardrobes – she appears to have it all. But Pan also has a spiralling spending addiction, a string of failed relationships, and still lives at home with her mum. Aged thirty-three.

When her numerous credit cards are refused, Pan takes drastic action, and joins dating website MillionaireMen.com. Will a super-wealthy guy be the answer to all Pan’s woes? And can she find one who’s sane, honest and not old enough to be her grandfather?

Your Move is a lively romantic comedy, charting the blossoming friendship between modern heroines Gemma and Pandora, as well as the amorous entanglements that crisscross both their lives.

Thank you to JB for letting me take part in this tour. I was grabbed by the cover of this book its bright and inviting. I then went on to read the blurb which sounded like something I would really enjoy.

The book follows Gemma and Pan as they both struggle through their life and fall in love.

Gemma works at an estate agents. She is very passionate about helping people find the right home for them. Her childhood saw her moving from pillar to post and she would love nothing more than a place of her own. Gemma is rather guarded with her heart and doesn’t want to end up like her mum. I really liked Gemma. She was down to earth, she was funny and given her past she was also very strong.

Marcus joins Hot Properties as their photographer. At first he seems a bit like he lives in the moment and doesn’t exactly plan for tomorrow but the more I got to know Marcus the more I really liked him. He has had a family tragedy and this has made him step up to the plate. Marcus needed to be strong for his family and he did exactly that. Marcus acts like an idiot at times and I really wanted to bash Gemma and Marcus’ heads together at some points as it was obvious they liked each other and both were too scared to say anything.

I really disliked Pan at first. I couldn’t understand her need to have so much stuff especially considering her situation. I’ve never been one for big brands and paying over the odds for things so I really struggled to understand her character. As her story progressed there were some aspects of her that I liked. She obviously cared about her friends and family and she really helps Gemma out too. Once you move past the superficial aspect Pan is quite a sweetie.

There were some parts of this book towards the end that I thought were a little far fetched but it didn’t ruin the story for me.

Pans mum Rose was one of my favourite side characters as was Humphrey Littlejohn. Rose just wants the best for her daughter and she’ll do whatever she can to help her. Humphrey is just a lonely man. He has all this money and no one to share it with. He is a man who worked hard and was rewarded greatly in some areas but not so much in the romance department.

The story was well written. It had good pace and I could relate to a lot of Gemma’s part of the story. I think my lack of relatability to Pan is a personal thing. Her character is well written and I know of people like Pan I just struggle to understand her.

If you are looking for a light romance that will have you giggling then this is one for you.

Silvia was brought up in a seaside town on the south coast of England by her mother and grandmother; she now lives in Kent. Silvia has two daughters, two stepdaughters and three granddaughters. With an abundance of women and girls in her life, it’s not surprising that female relationships, love, family and friendship are frequently the focus of Silvia’s writing.