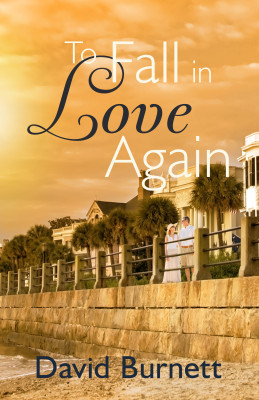 He resisted all of Amy’s attempts to draw him out− at the hotel, at the airport, on the airplane− giving hurried responses and burying his face in a pile of papers. It was only when the flight attendant offered coffee, and a muscle in Amy’s back twitched as she reached for it, and the cup tipped, and the hot liquid puddled in Drew’s lap that they began to talk.

Earlier in the year, each had lost a spouse of over thirty years. Drew’s wife had died of a brain tumor, Amy’s husband when his small airplane nose-dived to earth, the engine at full throttle − an accident, it was ruled.

They live in the same city. Both have grandchildren. They are about the same age. Consciously, or not, they both are looking to love again.

But relationships do not exist in vacuums. Drew is wealthy, and Amy is middle class. Amy is “new” in town – she and her husband moved to Charleston twenty-five years ago – while Drew’s family has lived there for three centuries. Drew lives below Broad, a code word for high society, old families, power, and money. Amy’s home is across the river.

Class warfare may be less violent than it was in the past, but when Drew invites Amy to the St Cecelia Ball, battle lines are drawn. In a city in which ancestry is important, the ball’s membership is passed from father to son, and only those from the oldest families attend.

Family, friends, co-workers all weigh in on their relationship and choose sides. Allies are found in unexpected places. Opposition comes from among those who were thought to be friends. Though they are gone, even their spouses − through things they have done and things they have said − wield influence in the conflict that follows.

Amy begins to suspect that Drew is one of them, the rich snobs who despise her, while Drew concludes that Amy neither trusts him nor cares for him. As each questions the other’s motives, their feelings for each other are tested, and Drew and Amy are challenged to consider if they truly want to fall in love again.

I live in Columbia South Carolina, with my wife and our blue-eyed cat, Bonnie. I enjoy traveling, photography, baking bread, and the Carolina beaches.
We have traveled widely in the United States and the United Kingdom. During one trip to Scotland, we visited Crathes Castle, the ancestral home of the Burnett family near Aberdeen.
My photographic subjects have been as varied as prehistoric ruins on the islands of Scotland, star trails, sea gulls, and a Native American powwow.
I went to school for longer than I want to admit, and I have graduate degrees in psychology and education. I was formerly director of research for our state education department.
We have two daughters and three grandchildren. To Fall in Love Again is my third novel.

One response to “Book News: To Fall in Love Again Cover Reveal Tour”

Secrets of the Starcrossed (The Once and Future Queen, #1) by Clara O'Connor

Fable (Fable, #1) by Adrienne Young
Visit my shelf on Goodreads