Why I wish it could be Christmas every day!

I am a MASSIVE fan of Christmas. I always have been but have kept it fairly quiet because it’s generally not considered very cool to sigh with delight on sighting your first Christmas tree in October, is it? But it’s like I can ‘come out’ now – because since writing Humbugs & Heartstrings and Mistletoe & Mayhem, I’ve found a whole community of book lovers who are all refreshingly unashamed about buying Christmas reads in September.

When I was deciding what to write a book about, I knew it had to be something I’d be happy spending the best part of a year with – and Christmas was the obvious solution. I’m not saying I’d like to celebrate Christmas all year round (like my heroine’s mother in Humbugs & Heartstrings) but, well, maybe . . . I mean, what’s not to love about the festive season? The lights, the bling, the glamour, friends and family meeting up, everyone smiling for a change, the pantomime (my 14-year-old still wants to go – yay!), great stuff on TV, champagne on Christmas morning and knowing it’s your absolute duty to consume large amounts of iced fruit cake and boxes of exotic chocolates – otherwise they’ll still be around in January.

Loving Christmas as I do, it’s really no hardship spending summers writing festive-themed books. Although picturing snow when the sun is blazing down can be a bit of a challenge.

With my debut, Humbugs & Heartstrings, I decided I wanted to write a modern take on Dickens’ A Christmas Carol, with a really mean and horrible female boss (Carol) as the Scrooge character – but I didn’t want Carol to be the main character. So it was inevitable that my main character, Bobbie, would be someone who would be in the direct firing line for all of Carol’s narkiness. Then I thought, wouldn’t it be great if once upon a time these two were the best of friends? Thankfully I’ve never had a ‘Carol’ in my life, so all the bitterness and anger between the two is drawn purely from my imagination.

Mistletoe & Mayhem, my latest festive offering, is all about a girl called Lola, who’s determined to host the perfect family Christmas. But things start to veer out of control when she is publicly dumped by her boyfriend over a supermarket tannoy. With her careful plans descending into chaos, as family ructions threaten to ruin the holiday, can love blossom amid the confusion? And will the magic of Christmas be enough to bring them all together again?

Here’s hoping your festive season will be full to the brim of that special magic, too. 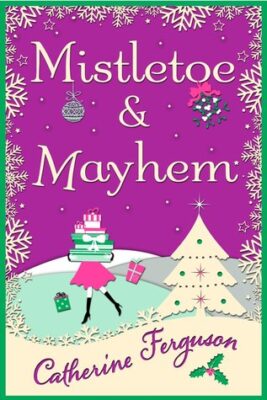 Lola Plumpton can’t believe her luck.
Christmas is coming and her gorgeous boyfriend, Nathan has offered up his swanky apartment to host the Plumpton family’s festive celebrations. It looks set to be a Christmas to remember. And it is – but for all the wrong reasons.
As the 25th December draws closer, Lola unexpectedly finds herself missing some key components:
1. A job (but who needs one of those anyway, when you’ve got the ultimate family Christmas to prepare for?)2. Money (no job equals no money, it turns out.)3. A boyfriend (yup, Nathan the hunk has said adios to Lola – and in the *most* embarrassing way possible…)4. Somewhere to host her fabulous family Christmas (because of course, no Nathan means no des res apartment.)
Lola’s at a loss about what to do. But one way or another, she’s going to make this the happiest Christmas her family’s ever had…

Author. Addicted to Scandinavian who-dun-its. (THE BRIDGE is back!!) Currently studying housework – would be grateful for any tips on how to get started.

Review: About A Girl
Q&A with Amy Lynch