In our household, I suspect like many others, there are certain family traditions which are written in metaphorical stone and without which Christmas just wouldn’t be Christmas.

The night we decorate the tree is when Christmas officially begins in our house, and much thought goes into working out the optimum weekend for buying the tree.  (Mainly because it’s my birthday in early December, and Christmas isn’t allowed before then!)

When the box of decorations is ceremonially carried down from the loft and we start unwrapping all the Christmas decorations from their tissue paper parcels, it’s like opening a magical memory box.  Over the years we’ve acquired new tree ornaments and as we hang each one on the tree, we reminisce about Christmas’s past, particularly about relatives who are no longer with us.  It’s a lovely way to remember them.

Over the years, we’ve built up our own family traditions around the tree and certain rules have been set in the Christmas stone.

These aren’t in the rules, but might as well be because they seem to happen every year without fail.

When I was writing From Paris With Love This Christmas, I wanted to capture a flavour of family tradition and I borrowed my own traditions as seen in this extract:

They’d create the tree decorations by dipping the cones cone into watered down white paint, drizzle each with a pinch of red glitter, add a loop of gold wire and tie a red bow around the loop at the top. For the wall decorations, Siena had something else in mind.

‘Get you.  Sounds fancy. Ours isn’t.’ Lisa rolled up her sleeves.  ‘Gosh this is organised.’

Siena had pre-cut the wire and the ribbon and lined everything up.

‘Nanna insists we put every ornament on the tree that she’s ever owned since the world began. We always do it together. It’s like a family tradition since I was tiny and my mum was still around.’ Lisa smiled wistfully.  ‘Mum used to buy a new decoration every year.’

Siena sat down opposite her and the two of them began dipping their cones in unison.

‘Is this right?’ Lisa asked holding up a completed decoration.

Siena nodded, wrestling with tying a tiny perfect red bow.  Lisa’s was a bit more haphazard but if it was near the top, no one would notice.

‘We always get our tree on the Saturday before Christmas,’ said Lisa, starting on the next one. ‘We get it up and put the lights on during the day and then, after tea, the box of decorations comes down from the loft.  That’s my favourite bit, unwrapping each one, from the tissue paper. Rudolf with the missing antler. Glass angels. A star I made in junior school. A pair of wooden ice skates Mum got in the church craft fair and of course the fairy for the top. She’s seen better days but we can’t throw her out.’

She beamed at Siena, her eyes dancing with pleasure.  ‘Brings back memories of all the different Christmases.  The year of the mouldy pudding, the one Mum forgot the crackers and our favourite, the Christmas of the farting dog, when my uncle brought his ancient spaniel with him. God the smell was awful.’ Lisa burst into peals of laughter.  ‘Me and Nanna almost refused to go to my aunt’s this year but she’s promised the dog’s on medication.’

Siena swallowed and concentrated on her decoration which was a bit difficult with her suddenly blurry vision.

It sounded very different from Christmas at the Chateau, where Sandrine would arrive each year in September with a series of mood boards depicting different themes for the household decorations and trees.  Her mother would study them for several days before making a final decision.  Then, on the first of December, Sandrine and her team would rock up with a van and transform the house in readiness for the first party. Nothing was ever done by the family. Unlike Lisa, she had no warming memories of decorating the tree together. It had never bothered her before, but now she felt like she had missed out on something … and it wasn’t something money could buy.

A selection of ornaments!

Every year I tried to lose Rudolf, he weighs a ton and makes the tree lopsided but I’ve given up the battle.  He was one of our first decorations from Granny.

Sparkly ice skates are a must for the tree. Granny bought these after a trip to Canada.

A present from last year from very dear friends (not granny this time) which will take pride of place this year. 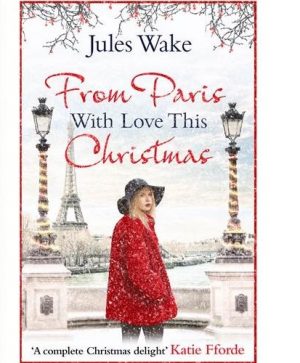 That’s what Paris socialite Siena keeps telling herself. She’ll hide away in her sister Laurie’s cottage near London to escape her hot-tempered fiancé.

However, when Jason – gorgeous but a bit of a Grinch – picks her up from the airport, he reveals that Laurie hasn’t lived there for months, complicating Siena’s holiday getaway.

At first, Jason and Siena don’t see eye to eye. But after a weekend in the most romantic city in the world, experiencing all it has to offer – from the magic of a fir-lined Champs-Élysées, lit up by thousands of sparkling fairy lights, to the swoosh of skates on ice at the Eiffel Tower – Siena shows Jason her Paris, and a whole other side to herself. Suddenly Siena’s December deadline seems far too close…

This Christmas, jet off to Paris with Siena and Jason and experience the magic of the holiday season.