City of Ashes by Cassandra Clare
Also by this author: City of Bones
Series: The Mortal Instruments #2
Also in this series: City of Bones
Published by Walker on 5th July 2010
Genres: YA Fantasy
Pages: 476
Format: eBook
Goodreads
Amazon Kindle, Audible

Clary Fray just wishes that her life would go back to normal. But what’s normal when you’re a demon-slaying Shadowhunter, your mother is in a magically induced coma, and you can suddenly see Downworlders like werewolves, vampires, and faeries? If Clary left the world of the Shadowhunters behind, it would mean more time with her best friend, Simon, who’s becoming more than a friend. But the Shadowhunting world isn’t ready to let her go — especially her handsome, infuriating, newfound brother, Jace. And Clary’s only chance to help her mother is to track down rogue Shadowhunter Valentine, who is probably insane, certainly evil — and also her father.

To complicate matters, someone in New York City is murdering Downworlder children. Is Valentine behind the killings — and if he is, what is he trying to do? When the second of the Mortal Instruments, the Soul-Sword, is stolen, the terrifying Inquisitor arrives to investigate and zooms right in on Jace. How can Clary stop Valentine if Jace is willing to betray everything he believes in to help their father?

In this breathtaking sequel to City of Bones, Cassandra Clare lures her readers back into the dark grip of New York City’s Downworld, where love is never safe and power becomes the deadliest temptation.

I don’t quite know how to start this review. After reading City of Bones even though I was disappointed by the ending I wanted to continue reading. I wasn’t quite ready to give up these characters. I am glad I continued as the story became more gripping. I found it quite difficult to put this book down.

Firstly I would like to say that I feel this book flowed more than the first. It was easier to read and to follow and less predictable that COB.

I felt sorry for Simon through this book because you can tell how much he is in love with Clary but she is still smitten with Jace, even after finding out he is her brother.

Clary knows its wrong but she just can’t help her feelings. I found these scenes hard to read. I kept wanting to scream “he’s your brother”. I did however persevere.

If you ignore the I’m in love with my brother aspect of this book it’s quite a good story.

Cassandra Clare was born overseas and spent her early years traveling around the world with her family and several trunks of fantasy books. Cassandra worked for several years as an entertainment journalist for the Hollywood Reporter before turning her attention to fiction. She is the author of City of Bones, the first book in the Mortal Instruments trilogy and a New York Times bestseller. Cassandra lives with her fiance and their two cats in Massachusetts.

Review: Children of Blood and Bone 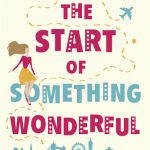 Blog Tour Review: The Start of Something Wonderful