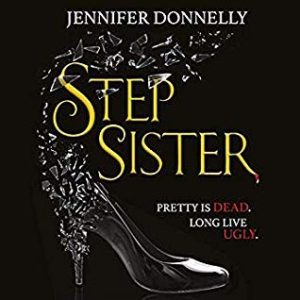 Isabelle should be blissfully happy – she’s about to win the handsome prince. Except Isabelle isn’t the beautiful girl who lost the glass slipper and captured the prince’s heart. She’s the ugly stepsister who’s cut off her toes to fit into Cinderella’s shoe ... which is now filling with blood.

Isabelle has tried to fit in. To live up to her mother’s expectations. To be like her stepsister. To be sweet. To be pretty. One by one, she has cut away pieces of herself in order to survive a world that doesn’t appreciate a girl like her. And that has made her mean, jealous, and hollow.

Until she gets a chance to alter her destiny and prove what ugly stepsisters have always known: it takes more than heartache to break a girl.

I love a good fairytale and I am very partial to a retelling too. I originally requested this book on netgalley but I listened to the audiobook which I borrowed vias my library app Borrowbox.

The book’s main character is one of the ‘ugly’ stepsisters from Cinderella. Isabelle has spent her whole life being told what she can’t do and has now got to the point where she believes she is rotten and ugly. Over the course of the book, Isabelle is shown that she is not rotten and ugly and she can do anything she likes. It’s so empowering to see Isabelle realise her full potential.

Jennifer does an excellent job of turning Isabelle from a villain to hero. Jennifer makes it really easy to root for Isabelle and the others to succeed. This book has such a strong moral message.

I enjoyed Jennifer’s writing style and I look forward to reading more of her books in the future.

Jennifer Donnelly writes books for tweens, teens, young adults and not-so-young adults. Her 2003 novel “A Northern Light” (“A Gathering Light” in the U.K.) won Britain’s prestigious Carnegie Award, a Printz Honor in the U.S., and was named by Time Magazine as one of the top 100 young adult books of all time.

In 2018, Jennifer collaborated with six other authors to tell the story of Henry VIII and his six wives in FATAL THRONE, which was named a New York Public Library Best Book of the Year.

“Lost in a Book,” her original novel set in the world of The Beauty and the Beast, was published in January 2017, and spent four months on the NYT bestseller list.

Jennifer is the author of the Waterfire Saga (“Deep Blue,” “Rogue Wave,” “Dark Tide,” and “Sea Spell”), published by Disney/Hyperion.

She also wrote the acclaimed YA novel “Revolution,” as well as the beloved historical Tea Rose series (“The Tea Rose,” “The Winter Rose,” and “The Wild Rose”).

She has one picture book for children called “Humble Pie.”

One response to “Review: Stepsister”