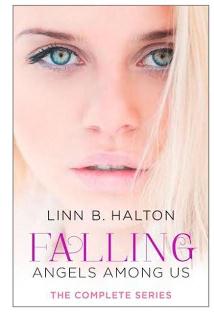 Falling Angels Among Us Series by Linn B Halton
Also by this author: Falling, Forbidden, A Little Sugar, A Lot of Love
Series: Falling Angels Among Us
Published by One More Chapter on 9th October 2014
Genres: Fantasy, Love & Romance, Romance
Pages: 380
Goodreads
Amazon Kindle, Audible, Bookhype


Ceri thinks she sees angels … everywhere. She struggles to keep separate what feels like two very different sides to her life. As a manager in an advertising company she’s been working with the gorgeous Alex for two years. The have a friendship based upon the image she portrays whilst she’s at work and it helps to keep her sane. One mad, crazy night spent sharing their secrets and a lot of wine result in them ending up in bed together and their relationship changes. When Alex explains that the reason he doesn’t date is because someone broke his heart, how can Ceri admit that she feels a deep connection to him?

Ceri knows she’s different. What she doesn’t fully appreciate, is that her task in life is to correct a series of incidents that affect some of the people’s lives with whom she comes into contact. She’s simply putting right little errors that could ripple outwards and change the course of their destiny. When she finds herself getting pulled into things that happen around her, how can she prove that she really has made a difference? Is it all in her head?

She’s alone for a reason; she’s not meant to fall in love in her earthly life. Alex is supposed to cross paths with her and help Ceri during a phase where she begins to question the signs she’s being given. It’s meant to be a turning point for them both—but in opposite directions.

3 responses to “Blog Tour: Falling Angels Among Us Series”