It’s the Easter weekend!!!! 4 days off work!!!! Whoop! and today I am joined by Jackie Baldwin for another Friday in Focus post.

Hello Emma, thank you for having me on your terrific blog!

Firstly lets start with your new book Perfect Dead, what can you tell us about it?

Perfect Dead is the second book in a police procedural series. An apparent suicide triggers a murder investigation that leads to the mysterious Ivy House, home of ‘The Collective,’ a sinister commune of artists who will do anything to keep their secrets hidden. The remains of a young girl are then uncovered and DI Farrell must track down a ruthless killer before another person dies, this time much closer to home.

DI Frank Farrell is a former practising RC priest who left the priesthood as a young man following a nervous breakdown after being taunted by a serial killer in the confessional. He enjoys solitude and runs as a way to quiet his demons. He is loyal and tenacious. DC Mhairi Mcleod is warm, funny and chaotic. She blows around the office like a hurricane but is a smart, intuitive detective.

I wrote the book over the course of 2017. In February of that year I developed angina. This culminated in a blocked artery and the insertion of stents in August. So, while I was writing, I had to fight fatigue and also the worry of what was happening to me. Thankfully, it has now been resolved and I have my energy back!

I like to sit at my desk in perfect silence with a steaming mug of coffee and some biscuits. I face a wall as I would find a view too distracting.

I’m not entirely sure. They arrive in my head as shadows and then gradually start to gain substance until they are fully fleshed out. Then, I start to hear snatches of dialogue as they begin to talk to themselves and each other. You can see why psychiatrists might make me nervous!

On a sun lounger by the sea but for the other 50 weeks of the year, snuggled up under my duvet.

I love to walk my dogs in one of the forests of Dumfries and Galloway where I live. I also have a very unlikely gym habit where I do classes in Body Pump, Body Combat and Spin.

Oh, I could spend all day gleefully pondering that question, Emma. I think I would choose the Galapagos Islands. I can’t imagine anywhere more fascinating.

It’s a toss-up between Spring and Autumn but I’ll go with Spring. I love the spirit of optimism it generates and seeing all that new growth before the bugs come out to feast upon me.

The very best thing is hearing from readers who have really engaged with my characters. Nothing brightens my day more.

I would head off to Keswick in the Lake District on market day. The dogs love it there as there are so many dogs of all shapes and sizes and there’s a very funny doggy vibe that it would be ‘uncool’ to act out. I’d buy some lovely food there and potter about then we’d take the dogs for a lovely long walk followed by a bar meal. On the way back we’d stop in Carlisle and take in a film. 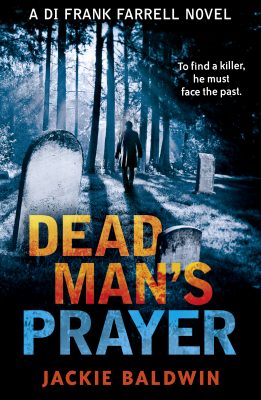 Ex-priest DI Frank Farrell has returned to his roots in Dumfries, only to be landed with a disturbing murder case. Even worse, Farrell knows the victim: Father Boyd, the man who forced him out of the priesthood eighteen years earlier.

With no leads, Farrell must delve into the old priest’s past, one that is inexorably linked with his own. But his attention is diverted when a pair of twin boys go missing. The Dumfries police force recover one in an abandoned church, unharmed. But where is his brother?

As Farrell investigates the two cases, he can’t help but feel targeted. Is someone playing a sinister game, or is he seeing patterns that don’t exist? Either way, it’s a game Farrell needs to win before he loses his grip on his sanity, or someone else turns up dead.

I’m a Scottish crime writer. For most of my working life I was a solicitor in a small rural firm specialising in family and criminal law. I then must have had something of a mid-life crisis because I retrained as a hypnotherapist and wrote a novel. I’m married with two grown up kids and two doggy ones. My first novel was called Dead Man’s Prayer and published by Killer Reads, Harper Collins on 2nd September 2016. The second is called Perfect Dead and will be out on 15th June 2018.