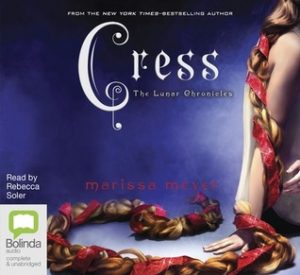 In this third book in the Lunar Chronicles, Cinder and Captain Thorne are fugitives on the run, now with Scarlet and Wolf in tow. Together, they're plotting to overthrow Queen Levana and her army.

Their best hope lies with Cress, a girl imprisoned on a satellite since childhood who's only ever had her netscreens as company. All that screen time has made Cress an excellent hacker. Unfortunately, she's just received orders from Levana to track down Cinder and her handsome accomplice.

When a daring rescue of Cress goes awry, the group is separated. Cress finally has her freedom, but it comes at a higher price. Meanwhile, Queen Levana will let nothing prevent her marriage to Emperor Kai. Cress, Scarlet, and Cinder may not have signed up to save the world, but they may be the only hope the world has.

This is the third book in the Lunar Chronicles. Cress was first introduced in book one when she warns Cinder of Levana’s plan for Emperor Kai but this book is her story.

Cress has been imprisoned on a satellite for most of her life. Our reimagined Rapunzel is a little different to our previous main characters Cinder and Scarlet. Cress is a bit more vulnerable in the beginning. Cress’ life has been extremely sheltered due to her imprisonment. Cress quickly learns what real life is like. Cress goes on a huge journey in this book and I couldn’t be prouder of her.

As well as this being Cress’ book this is also Thorne’s book. Through Cress, we learn a lot about Thorne, his past, his motivations. I have to say I did fall a little bit in love with Thorne in this book.

Like in Scarlet we have multiple POV in this story. This keeps us up to date with all the characters. Multiple POVs are one of my favourite things so I was obviously excited about this.

I loved the characters in this book and ultimately I loved the book but it did seem to take me an age to finish. There were a few points in the middle where it dipped but the end more than makes up for it. Once I finished I had to start Winter!