It’s Thursday which means the weekend is in sight!!! Today I am thrilled to be joined by S.C. Cunningham!

I am a Crime Investigator, I write steamy rom thrillers and paranormal crime romance. Divorced twice (got drunk, married in Vegas), have a wonderful artist daughter and am owned by three dogs.

I’m old, so I’ve managed to work in and draw from a few exciting industries over the years; modelling, fashion, rock n’roll, music to film production, football, horseracing, sport celebrity management and crime.

Can you tell us about The Deal?

When I was little, 3/4yrs, I was taken, I survived. Coming from an Irish Catholic family, I remember praying every night to God, offering him a deal; if I was a good girl, when I died could I sit on a cloud for a while, invisible, and help him get the baddies who slip through his fingers? I heard later in life that another little girl was taken in the next street, and she didn’t survive.

Like many others, I’ve found myself surviving a few unexplained dodgy situations where afterwards I’ve thought “Gosh, I must’ve had someone/something looking over me there…” I tend to like looking out for the underdog, getting justice. I’ve taken a few jobs which have enabled me to do that; child charity work, intelligence analyst and police crime investigator.

I’m not religious, but I feel that there is something out there, an energy. Maybe it’s just quantum physics we don’t understand yet. And with the world going a tad crazy at the moment, we need a little empowering escapism, so I adapted my childhood deal with God into a fictional series. I love romance and laughter, so of course sex and cheeky banter gets added to the mix.

The Deal is the story of feisty Amy Fox who was taken at 4yrs. She survived and did a deal with god. At 30, her deal and God long forgotten she mysteriously dies. She awakens to find MI5’esque Units in the skies, where vigilante angels dish out tough karma on those below. We follow her work, her revenge, her turbulent love life and attacks from competing forces. She has to wonder if her deal with God was a good thing?

From people I meet and experiences I have had…

I’d better not say any more, I’ve signed the Official Secrets Act and a few Confidentiality Agreements in my time. 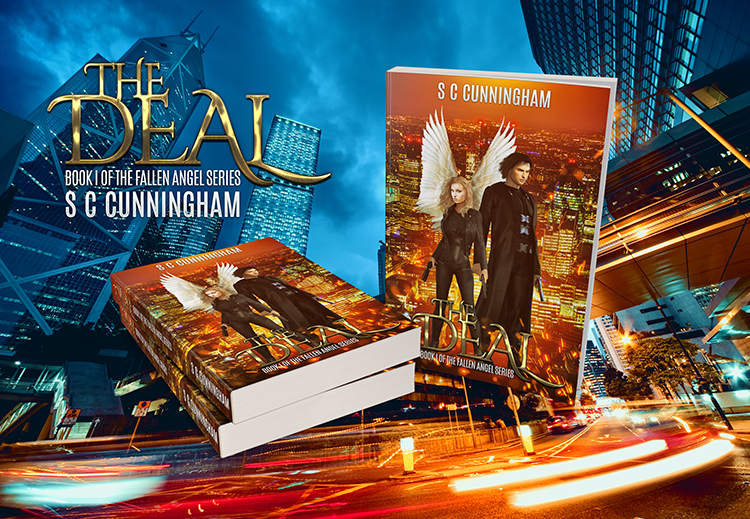 Read, dog walk on a beach, sit around a wine-food-ladened table in the sun with my girlfriends and no deadlines. Chill with my daughter – we manage to talk about absolute rubbish for hours!

Chocolate and sweets… I’m greedy… and I’ll only live once.

Would grab a delicious lover and fly to the Maldives, it’s heavenly. Second choice would be Hawaii, I’ve never been and it sounds wonderful. Although the Greek Islands are fab and closer to home. The lucky Greeks have it all; 2,500 islands, beautiful blue sea, sun, stunning beaches and good food. Shirley Valentine all the way… go girl!

I have a passion for Jack Reacher, so first on my list is Lee Child. Although if I ever met him I’d give him a bollocking, I can’t forgive for selling out to Tom Cruise. Tom is wonderful, am sure, but he is no Jack Reacher. Gutted.

Yes, everything I read influences me, whether its trashy news or gifted authors, I’m always on the lookout for the way words are played out, I love their power.

From a young age I enjoyed engaging people with stories that allowed them to escape, dragged them into a different world and encouraged them to look at things differently. I find it easier to write what I know, feel. My writing is loosely based on things I’ve experienced or observed, charged up a few notches with cheeky imagination, sex, murder and laughter.

In The Deal, I get to work with a few sexy, kick-ass characters and dish karma on the injustices I see around me in day to day life. It’s fun.

Yes, the solitude. I’m naturally a chatty, social being, but my writing locks me away to live like a mushroom in the dark. I become a reclusive, batty, scruffy old lady who spends all day talking to herself. Thank god for my dogs (and understanding friends).

Do you have a favourite childhood/teen story/novel?

I grew up on Enid Blyton books; I think they were banned in the convent boarding school I went to, which is crazy. I loved the Secret Seven until I read a crumpled copy of The Carpetbaggers by Harold Robbins – now that was definitely banned! 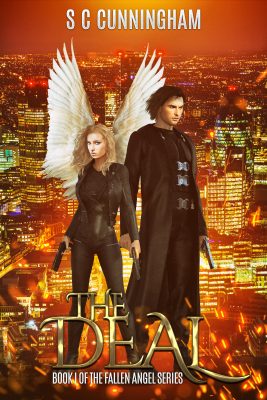 
A Paranormal Thriller for those who dare to believe that there is something else out there…
At the age of four, Amy was taken…She survived.

A week later, another little girl was taken…She didn’t.

Angry that a bad man has gotten away with murder, feisty young Amy Fox makes a deal with God. When she dies, if she’s been a good girl, would God let her sit on a cloud for a while, invisible, to get bad people who slip through his fingers?

She awakens in the afterlife to discover an international network of like-minded souls who’ve all made the same deal. A sophisticated MI5-esque justice machine sits in the skies, protecting, righting wrongs, tracking criminals, and working within strict rules of play…all against time.

Each country’s Unit shares intelligence, surveillance, and resources to deactivate dangerous situations. The only evidence they leave behind during their earthly visits is a small white feather sashaying to the ground.

In a chaotic world, powerful adversaries try to close her Unit down. A complex SAS vigilante has been assigned to work as her partner, but with his jealous violent ex-girlfriend on her heels and with her own vendetta to settle, Amy has never worked so hard in her entire earthly life. She has to wonder if making a deal with God was a mistake. 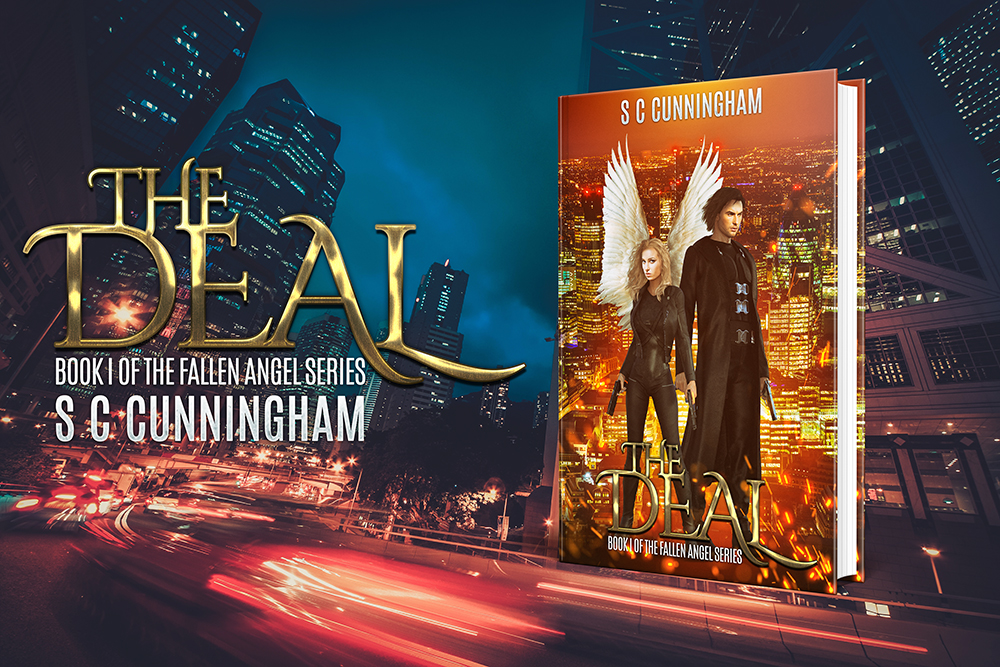 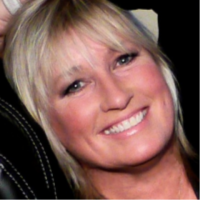 Author of The Penance List, Unfinished Business and The Deal, Siobhan C Cunningham (S C Cunningham) creates Paranormal Romance and Psychological Crime Thrillers with a skilled mix of fuelled tension, dark humour, and pulsating sex scenes. Having worked in the industries she writes about, her novels offer a fresh level of sincerity and authority, rare in fiction.

Abducted as a child, she survived; and every night for months afterward, she prayed to God, asking for a deal. This personal journey sparked the fuse behind the intriguing and riveting fictional world she portrays in The Deal, the first in The Fallen Angel series. Twenty years later Cunningham crossed paths with a violent serial attacker, sowing the seed for her mind-bending thriller, The David Trilogy; The Penance List, Unfinished Business, For My Sins.

An ex-model, British born of Irish roots, she married a rock musician and has worked in the exciting worlds of music, film, sports, celebrity management and as a Crime Investigator for the British Police (Wanted & Absconder Unit, Major Crime Team, Intelligence Analyst, Investigations Hub).

Her first novel, The Penance List has been adapted to film screenplay.

She is the proud mother to contemporary Artist Scarlett Raven and owned by three dogs.

One response to “Blog Tour: The Deal”