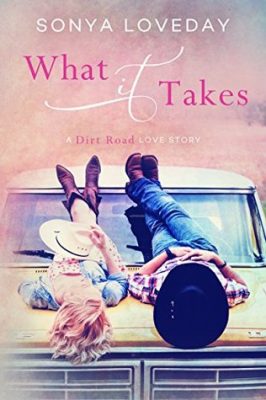 What It Takes: A Dirt Road Love Story by Sonya Loveday
Also by this author: The Summer I Fell, Love Always,, Runaway Heart, End Note
on 18th May 2017
Pages: 252
Goodreads
Amazon Kindle, Audible


Gracen Lowell is on the hunt for a man—but not just any man. He has to be ‘the one’. Her only problem is that no one she’s dated has ever measured up to the charming qualities of her best friend.

Slade Owens knows no matter how much he loves Gracen, he’ll never be what she’s looking for. And he dang sure isn’t going to stick around to watch her fall in love with someone else. Slade leaving the Owens’ family farm for an out-of-state job should put enough distance between the two to allow him to move on with his life and Gracen to search for her happily-ever-after.

Gracen knows asking him to stay isn’t fair. Slade thinks leaving her behind is the only thing to do. Inexplicably drawn together, the best friends must decide if they have what it takes to own up to their feelings… before it’s too late.

**Content Warning**
This is a full-length, standalone novel that touches on the topic of domestic abuse. Suitable for ages 18+.

“You coming?” he called to me from the porch. Both our bags were slung over one shoulder and Lucy, tail thumping against the worn boards, was sitting by his feet.

They were a picture, the two of them. Man and beast. My man and my beast, even if only in my dreams, I thought, catching the door handle and getting out of the truck as Slade made his way inside.

Closing my eyes, I pretended I was home and he was mine. He’d welcome me in at the front door with a kiss hot enough to sear my lips and melt me to the floor. We’d make it as far as the rustic living room before shedding clothes behind us in a trail to the bedroom.

I shook my head to clear it. That same moment had flashed through my thoughts so many times before.

Before I could make it to the porch steps, Slade came back out. He caught hold of the door casing and stretched forward. My knees wobbled when his eyes met mine.

“It’s like coming home, every time we come here,” he said.

My steps faltered at his words. “It’s special… this place. You can feel it.” My fingers dipped and swayed against the slight breeze that flitted through the trees.

There was something extraordinary about it, but nothing I could physically point out. It was more like a feeling. A welcoming. Like it was a haven that spoke to something deep inside me.

Lucy poked her nose past Slade, panting with a huge doggy grin. He didn’t look down at her.

“Are you planning to stay out there the whole time?” he asked. There was something different in the way he gazed at me. I couldn’t quite put my finger on, but it almost felt like something more.

“Can’t really go inside when you’re standing in the doorway.” I smirked at him, trying not to show my confusion.

“Tell me something, Gracen. And be honest,” he said, unmoving.

Nervous energy shot through me, every single point of awareness standing on end. There was a look in his eyes I thought I’d glimpsed a few times before, but it had always been gone as quick as it came. I’d always brushed it off as my imagination, conjured up because I wanted it so bad. But this time, there was no mistaking it. It held promises unspoken. Secrets long buried.

I could feel the pulse at my neck hammering as if my heart had dislodged itself and was working its way up and out. My arms tingled as if my skin were made of wildly flapping butterfly wings, and my stomach  twisted  around  a giant  rock  of something molten that emptied itself down into my legs. The two halves of my body were at war with one another—one wanted to fly away, the other to sink into the ground.

One response to “Book News: What it Takes Release Boost”