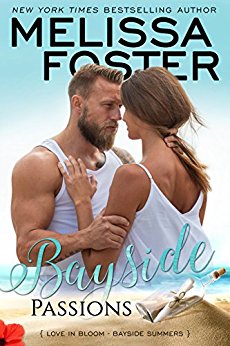 Fall in love at Bayside, where sandy beaches, good friends, and true love come together in the sweet small towns of Cape Cod.

In BAYSIDE PASSIONS…
When Emery Andrews’s best friend, Desiree, moves away, falls in love, and opens a an inn all in one summer, she feels her absence like a missing limb. Until she visits over the holidays and meets sinfully hot Dean Masters, who’s as easy on the eyes as he is to talk to. After returning home, what starts as a flurry of late-night flirtations quickly turns into a deep connection and unexpected friendship. Now, months later, Desiree offers Emery a job teaching yoga at the inn. Adventurous Emery jumps at the chance and heads for Wellfleet, Massachusetts, to reunite with her BFF and her new close friend, Dean.

After months of sharing their lives, and their secrets, over video chats and phone calls, Dean’s ready to move things to the next level. The fact that Emery seems oblivious to the sparks between them and has recently put her foot down about dating friends just means he’ll have to bide his time.

When Emery finds a naked man in her kitchen the first morning she’s there, Dean doesn’t hesitate to move her into his guest room. Maybe now Emery will see what’s right before her eyes–although that guy she’s got a date with might be a problem.

Thank you to Lisa for letting me take part in this blog tour. We met Emery and Dean in Bayside Desires and I knew then that there was something between these two.

Since Christmas, at the end of Bayside Desires, Dean and Emery have spoken pretty much every day. Whether it be a text,a telephone call or a video-chat most it had become unusual for a day to go by without them having some communication. When Emery moves to Wellfleet the sexual  tension between the two finally starts to bubble over.

Emery is a whirlwind of a girl who only knows how to speak her mind. She blows in scattering her stuff here there and everywhere but for Dean the sight of her stuff just fills his heart. After months of getting to know Emery, Dean knows there’s no one else he’d rather have creating chaos in his life.

Dean is strong but sensitive. He’s the kind of man that makes you feel safe by just being in his presence. It’ also quite obvious he will do anything for those that he loves.

This book has some big laughs but also some surprises up its sleeve that I didn’t see coming.  Dean and Emery are a perfect match and I can’t wait to see who Melissa creates for us next.

After a nice long shower, she dried her hair and threw on a pair of cutoffs and a peach tank top, all the while hoping Desiree had enjoyed amazing sex last night so she’d make one of her delicious, fancy breakfasts. She assumed Violet had had a fun night, although they hadn’t made any noise that she could remember. Could Violet have had bad sex? Maybe it really isn’t the length of the sword, but how expertly they wield it. She laughed to herself, imagining if that had been the case, Violet would have kicked his butt out of the house long before morning.

She headed over to the inn to question Desiree about long-dong naked man. Cosmos, the dog Desiree and Violet had inherited along with the house, greeted Emery at the kitchen door, yapping and trying to crawl up her legs. He was some sort of terrier mix, with pointy ears, mostly gray, wiry fur, and big brown eyes. She scooped up the scruffy pup and he licked her chin. “Hey there, matchmaker.”

Desiree’s mother had lived in the house for a few months before tricking Desiree and Violet to come out and stay there last summer. Unbeknownst to them, as part of a grand matchmaking scheme to bring Rick and Desiree together, Lizza had trained Cosmos to climb the fence and swim in the pool at Bayside Resort. It had worked so well, and Desiree was so happy, Emery almost wished Cosmos would work some magic for her.

That would take a miracle.

Not a single person in her family seemed to know how to have a lasting relationship. They were a boisterous, opinionated bunch, and because of that, she knew they were not easy partners. Her brothers were constantly flirting and rarely held their tongues. She had the not-holding-her-tongue thing down pat, and as for flirting? Well, she was pretty good in that department, too. The trouble was, several men she’d gone out with had accused her of flirting with other guys even when she wasn’t.

She stepped inside and set Cosmos on the kitchen floor. The sounds of spatulas on pans and laughter filled her ears. Desiree stood at the stove flipping pancakes. Dean, Rick, and Drake sat at the table, shirtless, their bronze physiques on display as they scarfed down breakfast. They were all athletic, but damn. Rick and Drake looked like boys next to Dean’s Adonis-like body. The way they were shoveling food into their mouths, she wondered if they’d run the entire length of the Cape. She might not find love, like Desiree had, but she knew she’d find plenty of other types of happiness here at the Cape.

The guys looked up, and Rick and Drake mumbled “good morning” around their food.

Dean smiled, lifting his chin in greeting as she plucked a piece of pancake from his plate and popped it in her mouth.

“Mm-hm.” She reached around him and grabbed his coffee, helping herself to a sip. Dean intercepted the mug before she could set it back down and took a gulp. “But the naked guy in the kitchen kind of threw me for a loop.”

Dean spit coffee all over the table. “What?”

“Watch it!” Drake flew from his chair, causing Cosmos to bark and setting Emery and Desiree laughing.

“Jesus, Dean.” Rick brushed coffee from his chest. “What the hell?”

Dean grumbled something that sounded like “sorry,” his angry eyes locked on Emery. “What naked man?”

Desiree tossed Rick a towel and said, “There was a naked guy in Violet’s kitchen?”

“No.” She handed Emery a plate of pancakes. “I know she has an old friend who lives in the area, but she refuses to tell me anything about him.”

“Well, they didn’t make a sound, so either I slept like a log or their tryst should go down in the Guinness Book of World Records for the quietest sex ever. Do you have a tent I can borrow for the next few days?” Emery asked.

“You’re staying at my place,” Dean said adamantly. He carried his plate to the sink and began scrubbing it clean.

“I can’t intrude on you,” Emery said. “I’ll mess up your mojo or something.”

He turned off the water and faced her, arms crossed, jaw tight. “My mojo is already messed up, and I’m pretty sure ‘or something’ follows you everywhere you go. You can, and you will, stay with me. It’s not safe for you to be around strange naked guys.”

“Think it’s safe for her to be around you?” Rick asked.

Dean glared at him.

“Dean would never hurt me.” Emery sat down at the table and speared a pancake from the platter Desiree set before her. “You sure you don’t mind, big guy? It’s actually perfect, considering I can walk there,” she teased. “But I have to warn you, I’m not the neatest person, and I suck at cooking, but I’ll—”

“Keep her out of your kitchen,” Desiree warned. “I’ve seen her cook. Not only will your kitchen never recover, but neither will your stomach.”

“Truth,” Emery said, and ate another forkful of pancake.

“I don’t need you to cook or clean. Just stay out of my gardens and we’ll be fine.” Dean glared out the window over the sink at Violet’s cottage, looking like he was strategizing World War III.

“Okay, thanks. I’ll get my stuff after breakfast,” she said.

“I’ll get your stuff and take it to my place while you eat,” Dean said. “I’m working in the hospital gardens today. I’ll make you a key while I’m out and text you when I get back.”

Before she could say a word, he stormed out the door.

“That’s a man on a mission,” Desiree said as she sat down beside Rick.