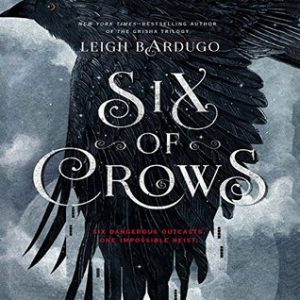 Ketterdam: a bustling hub of international trade where anything can be had for the right price – and no one knows that better than criminal prodigy Kaz Brekker. Kaz is offered a chance at a deadly heist that could make him rich beyond his wildest dreams. But he can’t pull it off alone.

A convict with a thirst for revenge. A sharpshooter who can’t walk away from a wager. A runaway with a privileged past. A spy known as the Wraith. A Heartrender using her magic to survive the slums. A thief with a gift for unlikely escapes. Six dangerous outcasts. One impossible heist. Kaz’s crew is the only thing that might stand between the world and destruction – if they don’t kill each other first.

If you saw my reviews of The Shadow and Bone Series you know that I wanted to read this book for a little while but I also wanted to read the books in chronological order. I’d seen this book a lot on Instagram but the main reason I picked it is because the audiobook has a full cast. I recently enjoyed Illuminae which had a full cast so went looking for more audiobooks like this.

I found the first few chapters of this story quite confusing and I think I was a good 40% in before it all clicked. There are multiple POV in this book which is always something I enjoy but it did make this more confusing, to begin with. It takes quite a while to get to know each of the characters and learn their backstory but its definitely worthwhile.

My favourite characters were Inej and Nina. Both have harrowing backstories and are still so brave. I loved seeing these two develop throughout the story.

The pace is quite slow, to begin with, but really speeds up about halfway through. There were a few twists and turns along with a few heart-stopping moments.

This was an epic story that I can see myself listening to again and still enjoying it just as much.