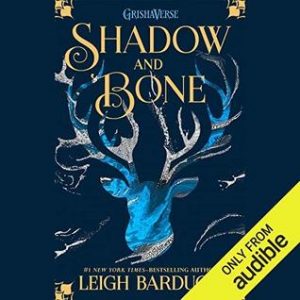 Surrounded by enemies, the once-great nation of Ravka has been torn in two by the Shadow Fold, a swath of near impenetrable darkness crawling with monsters who feast on human flesh. Now its fate may rest on the shoulders of one lonely refugee.

Alina Starkov has never been good at anything. But when her regiment is attacked on the Fold and her best friend is brutally injured, Alina reveals a dormant power that saves his life—a power that could be the key to setting her war-ravaged country free. Wrenched from everything she knows, Alina is whisked away to the royal court to be trained as a member of the Grisha, the magical elite led by the mysterious Darkling.

Yet nothing in this lavish world is what it seems. With darkness looming and an entire kingdom depending on her untamed power, Alina will have to confront the secrets of the Grisha . . . and the secrets of her heart.


I was lucky enough to receive a copy of this via Netgalley but I actually read (listened) to this on audible. I sign up to a lot of blog tours and I end up pausing some books half way through so I can meet blog tour deadlines (totally going to be more organised next year) but I have found I can listen to books while I do other things like getting ready for work, driving, washing up etc so I actually listened to this one instead of reading the netgalley copy.

I was actually going to listen to Six of Crows as it had a full cast but I found out that the two series were related and this book was chronologically first. A lot of people said it was fine to listen to Six of Crows first but I’m a bit of stickler for that sort of thing so I went for this book (and the rest of the trilogy first) I am actually glad I did it that way round because there’s a lot of world building that is in Shadow and Bone which I think you are expected to know when you read Six of Crows.

I found Alina a realistic character for one in such a made-up world. She is your average girl. There’s nothing special about her. She is in love with her best friend who doesn’t realise it and carries out her day to day chores and roles. I know a lot of people don’t like Alina but I found her character intriguing because she was such an average girl before she discovers that she’s actually grisha.

Once Alina’s true identity is discovered she meets The Darkling. Essentially the leader of the grisha. I had a love-hate relationship with The Darkling. There is something so appealing about him that you want to like him but you just know you shouldn’t. He’s also a great character to quote.

Leigh did an amazing job with the world building in this book. I believe it is inspired by Russian history. I am not big on history but Leigh did such a good job of pulling me into the world that it really didn’t matter. Everything you need to know Leigh will tell you. Piece by piece.

This was a great start to the series that will have you gasping in shock, sitting on the edge of your seat in suspense and screaming in anger. As soon as I finished this one I had to start Siege and Storm because I knew I had to be back with these characters again.

Blog Tour: Hopelessly Devoted To Holden Finn
Why I Limited to 2 Genres