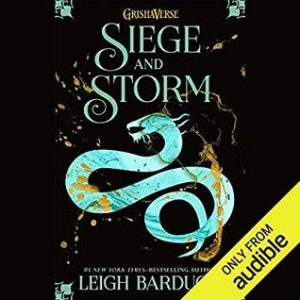 Hunted across the True Sea, haunted by the lives she took on the Fold, Alina must try to make a life with Mal in an unfamiliar land. She finds starting new is not easy while keeping her identity as the Sun Summoner a secret. She can’t outrun her past or her destiny for long.

The Darkling has emerged from the Shadow Fold with a terrifying new power and a dangerous plan that will test the very boundaries of the natural world. With the help of a notorious privateer, Alina returns to the country she abandoned, determined to fight the forces gathering against Ravka. But as her power grows, Alina slips deeper into the Darkling’s game of forbidden magic, and farther away from Mal. Somehow, she will have to choose between her country, her power, and the love she always thought would guide her–or risk losing everything to the oncoming storm.

As soon as I finished Shadow and Bone I had to jump into Siege and Storm. Mal and Alina have been living a normal life for a while now but Alina is struggling. By not using her powers she is making herself weak and quite frankly unhappy. It’s not long before The Darkling catches up to them and their life is thrown into chaos again.

I enjoyed this book so much. I cannot describe how much. This was due to one of my all-time favourite characters Sturmhond aka The Clever Fox. This character is blunt, honest and oh so witty.

Mal irritated me a lot in this book. He was selfish and very whingey. Alina is trying to save the world from The Darkling and he is complaining because she doesn’t want a few kisses. He doesn’t stop to notice that something is wrong he is so wrapped up in himself that he can’t see that something is seriously wrong.

On the flip side, Alina kept everything to herself and never asked anyone for help which frustrated me immensely. Just ask for some god damn help woman!

This book is so much more than the first and it made my love for the series and the verse increase dramatically. (Yes most of that is down to Sturmhond)

The end of this book is pretty dramatic/cliffhanger like so I was so so glad I didn’t need to wait for the final book in the series.