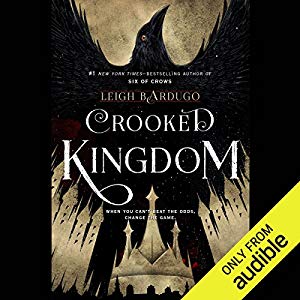 The highly anticipated sequel to the thrilling New York Times best-selling Six of Crows.
Kaz Brekker and his crew have just pulled off a heist so daring even they didn’t think they’d survive. But instead of divvying up a fat reward, they’re right back to fighting for their lives. Double-crossed and badly weakened, the crew is low on resources, allies, and hope. As powerful forces from around the world descend on Ketterdam to root out the secrets of the dangerous drug known as jurda parem, old rivals and new enemies emerge to challenge Kaz’s cunning and test the team’s fragile loyalties. A war will be waged on the city’s dark and twisting streets – a battle for revenge and redemption that will decide the fate of the Grisha world.

Six of Crows had me hooked and when it ended I just had to carry on with the series immediately. By now we know each of the characters, we know quite a bit of their backstory but there are still some things to learn about each of them.

Unlike Six of Crows, this story is action from the beginning. The book is full of schemes and manipulation. Kaz Brekker is a master manipulator. His schemes are the best in Ketterdam and even as the reader you can’t be sure if you are being tricked or not. There were times when I really didn’t know how it was going to go for the gang and I was holding my breath for the resolution.

One character I enjoyed seeing again was Sturmhond. It was great to see his wit and brutal honesty again.

I can’t describe how much I loved this story. It’s undeniably epic and Leigh does an exceptional job of dragging you into her world and wish you never had to leave.

I am now counting down the days until I can be back in the world of Leigh in King of Scars.

Blog Tour Review: Spring at Blueberry Bay
Why I Limited to 2 Genres