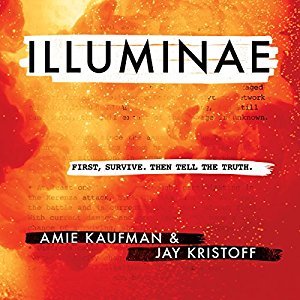 This morning, Kady thought breaking up with Ezra was the hardest thing she’d have to do.

This afternoon, her planet was invaded.

The year is 2575, and two rival megacorporations are at war over a planet that’s little more than an ice-covered speck at the edge of the universe. Too bad nobody thought to warn the people living on it. With enemy fire raining down on them, Kady and Ezra—who are barely even talking to each other—are forced to fight their way onto an evacuating fleet, with an enemy warship in hot pursuit.

But their problems are just getting started. A deadly plague has broken out and is mutating, with terrifying results; the fleet’s AI, which should be protecting them, may actually be their enemy; and nobody in charge will say what’s really going on. As Kady hacks into a tangled web of data to find the truth, it’s clear only one person can help her bring it all to light: the ex-boyfriend she swore she’d never speak to again.

Told through a fascinating dossier of hacked documents—including emails, schematics, military files, IMs, medical reports, interviews, and more—Illuminae is the first book in a heart-stopping, high-octane trilogy about lives interrupted, the price of truth, and the courage of everyday heroes.

Wow, where to start with this review? I have been badgering the BF to use his audible credits for this series for months. I had heard on Instagram how it was one of the most amazing audio books. I don’t really like audiobooks. I have always struggled with the voices and find they ruin my perception of the character. But this book has a full cast and it changes everything! EVERYTHING! Every audiobook deserves a full cast. If all audiobooks where like this I would definitely listen to more of them.

On to the actual story… I love the two main characters in this book. Kady is spunky but also very clever. Ezra is hilarious. I absolutely love his sense of humour.

Kady goes through so so much in this book that by the end you forget that she is only a 17 year old girl. The things that she encounters, the emotional turmoil is absolutely harrowing and by the end she is no longer the same teenage girl she was.

The other character we should also talk about is AIDAN. Well what can we say about AIDAN? There is so much to say and yet so little I can share. He is such a quotable character.

This book is full of twists and turns I did not see coming. I absolutely loved every word which is weird to say when most of it was actually heartbreaking. These authors work so well together. The story is seamless and flows effortlessly.

As soon as I finished this book I downloaded the next audio in the series because I just could not leave it there.