The Girls in the Fire by Dea Poirier
Also by this author: Find Me in the Dark
Series: Detective Harlow Durant #2
Also in this series: Find Me in the Dark
Published by Bookouture on 4th March 2022
Genres: Crime, Suspense, Thriller
Pages: 302
Format: eARC
Source: from Netgalley
Goodreads
Amazon Kindle

As I walk further down the logging road, the faint smell of fire on the wind startles me. But it can’t be—it must be in my imagination. I pick up my pace, walking quicker. It can’t all be in my mind. The glow, the thickening stink, it all hits me at once. My hand trembles as I reach for my phone, adrenaline already hitting my blood. There’s another body, a second victim in Saranac Lake.
When the remains of a young woman are discovered on the edge of picturesque Saranac Lake, Detective Harlow Durant races to the scene. The area is already under watch after hikers discovered several bodies, stabbed to death in the national park. But as Harlow stares at the charred remnants of an innocent young life, she knows that this is a different killer with a very twisted motive.
The victim is identified as twenty-six-year-old Ellie Gordon—a seemingly normal girl with no known enemies. But as Harlow begins to piece together the evidence, another body is discovered at the lake. The only connection, a man they used to date. But why would he want them dead?
With a small community reeling in shock, Harlow knows time is running out to piece together the only lead she has before another woman loses her life. But soon she is confronted by a woman who brings her face to face with the secret she has spent her life running from. And when her car is violently run off the road, Harlow has to question whether this case has become too personal.
Can Harlow come confront her demons to save another innocent life from being lost? And just how much is she prepared to sacrifice?
From the bestselling author of Next Girl To Die comes a chilling serial killer thriller perfect for fans of Melinda Leigh, Kendra Elliot and Robert Dugoni’s Tracy Crosswhite series.

Thank you to Bookouture for my copy of this book via Netgalley. I really enjoyed the first book in this series, so I was very excited to jump back in.
Harlow and Lucas are a great team and I love their relationship. Harlow struggles to open up to anyone given her past but Lucas has broken down some of her walls.
This case was very interesting. It had a everything that makes a good crime thriller. The suspense, the mystery and the twist and turns. I loved it.
I loved the different POV and timelines. I am a huge fan of seeing different POV as I feel it give a much more realistic view of the story. I like to see the whole picture.
Dea really roped me into this story and I cannot wait for the next instalment. 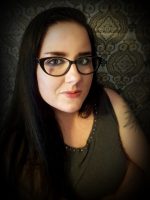 Author Dea (D.H) Poirier is the author of NEXT GIRL TO DIE, which hit #1 in the Amazon charts. She was raised in Edmond, Oklahoma, where she got her start writing in creative writing courses. She attended The University of Central Oklahoma for Computer Science and Political Science. Later, she spent time living on both coasts, and traveling the United States, before finally putting down roots in Central Florida. She now resides somewhere between Disney and the swamp. She spends her days at her day job as a President of Digital Marketing, and her nights writing manuscripts.

2 responses to “Blog Tour Review: The Girls in the Fire”