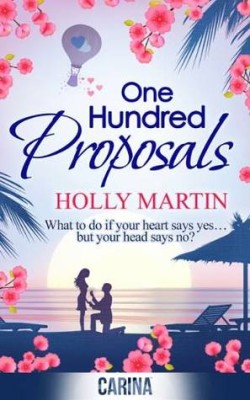 ‘Is there really such a thing as a perfect proposal?

Over the next hundred days I intend to find out. I will find one hundred ways to propose to our Chief Proposer Suzie McKenzie and post the results here for your enjoyment. One thing’s for sure, not one of my proposals will be on top of the Eiffel Tower with a dozen red roses.’

Best friends Suzie and Harry are partners in romance. That is, they run the.PerfectProposal.com, coming to the aid of would-be grooms to create the ultimate marriage proposal.

But when Harry decides to catapult the business into the big leagues with a PR stunt all Suzie can see is a hundred days of heartbreak stretching ahead of her. But however exotic the location, or breath-takingly romantic the setting, Suzie has to keep remembering that ‘Marry Me?’ is the one question she can’t say yes to.

This business proposal should come with one hundred broken heart warnings…

One hundred proposals, one hundred chances to say yes.

OMG this book is amazing!!! I had heard a lot of chatter about it on twitter and I read the first two chapters on Aven Ellis’ blog and I was hooked. I instantly went to Amazon and 1-clicked this baby. I then bumped it to the top of my TBR pile.

Suzie is in love with Harry and has been for a LONG time. But she is too damn scared to tell him. What if it ruins the friendship that they have. Having him as friend means everything to her and if she lost him completely she doesn’t know what she would do.

Harry is sweet and kind but he’s got a reputation for not getting serious. He decides to push the website into something bigger by finding the perfect proposal. How is he going to do that you ask? well he has 100 proposals to plan and who is he going to ask Suzie of course. To say that Suzie was less than enthusiastic about this idea is an understatement. How can she listen to the guy she loves ask her to marry him 100 times and know that he doesn’t mean a single one of them. It’s going to break her heart.

There are with some very original proposals and I think if my boyfriend asked me anyone of them I would say yes. But I have to say my favourite proposal is the one from the prologue.

This book really pulls at your heartstrings. You see their friendship going through ups and downs throughout the book and you start to wonder if there even going to finish the 100 proposals let alone anything else.

I literally Loved every page I couldn’t put it down then realised I  was 70% done and didn’t want to end. I read the last few chapters extremely slowly because I wasn’t quite ready to say goodbye to these characters.