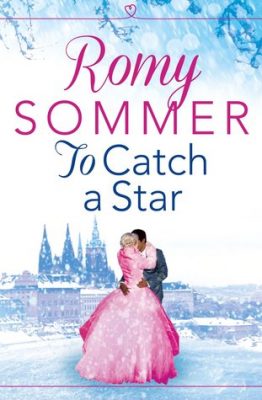 ‘A fairy-tale romance to warm even the coldest of hearts.’ – Chloe’s Chick Lit Reviews

Teresa Adler is the ultimate Ice Princess, with a heart as frozen as the winter landscape of her beloved home, Westerwald. All her life, she’s belonged to the ‘inner circle’ of wealth, privilege and position.

Christian Taylor: Heartthrob. Movie Star. Bad Boy. The mischievous actor sets temperatures soaring in the picturesque baroque principality – and with a wicked glint in his eye and a chip on his shoulder he sets his sights on the one thing he’s told he can’t have. Teresa.

While Tessa holds the ultimate clue to the secret of Christian’s parentage, it is the heat of his touch that will make this Ice Princess feel more alive than she ever has before…

Thank you to Lisa at Tasty Book Tours for letting me take part in this tour.

Ever since I was a child I’ve always loved a fairy tale. I watched all the Disney films, Belle was always my favourite, and wanted to one day fall in love with my Prince. Not an actual Prince, although I wouldn’t turn Prince Harry down, I mean a man who would love me like they do in fairy tales.

Tessa/Teresa is know as the Ice Princess in her little town of Westerwald. She is cold and unfeeling. She has this mask that shows who she should be, but the real her? No no-one has seen that. I really liked Tessa when she let herself be who she truly is. Not the façade for her family’s sake or for the rest of the Aristocrats around her. The Tessa that let her hair down and really enjoyed herself.

Christian is this big time Hollywood actor who is used to women falling at his feet. We start off with him running away from 5 women. So it’s more than a shock for him when Tessa doesn’t fall at his feet. In fact when he uses all of his tricks and charm and she still doesn’t want him he’s even more determined to make her pay. But somewhere along the way it all goes a bit wrong.

I really liked Lee and Anna, they seemed to be the only true friends that Tessa had. Dom has been there for Christian through it all. I was glad they both had people they could talk to.

While it was a slow start once I was around over halfway through I couldn’t put this book down. This was the first book of Romy’s that I’ve read but it won’t be the last.

This is a beautiful story of love, facing your fears and stepping out of your comfort zone.

One woman tearing your clothes off was fun. Five at once? Not so much.

“Please, ladies…” Christian was only half laughing now.

Rip. There went an Armani sleeve. He shrugged away from the grasp, but there were still other hands pulling at him, tugging at him.

He’d known adoring fans before but they seldom pawed him. And this had gone way beyond pawing.

“I’ll sign autographs, but you really don’t need to take souvenirs.” He had to raise his voice over their squeals. This was definitely not fun. In fact, it was getting downright scary. The crowd surrounding him pressed in tighter. There seemed to be more of them now too.

Another rip. This time his shirt. The excited squeals increased in volume.

“He’s mine!” shouted one over-eager fan.

“Mine!” the others echoed.

“Well, actually, ladies…” He belonged to no one. But in the grip of mob mentality, they neither heard nor cared.

He had to get out of here.

With another rip, this time the rear seam of his evening jacket, he pulled away from the knot of admirers. One young woman tumbled to her knees with the impetus. Fighting every instinct to be a gentleman, he didn’t pause. He ran.

The sound of their pursuit spurred him on. He ran blindly. Now he knew how it felt to be the fox in a fox hunt.

A block or two further and the number of feet behind him seemed to diminish, but he still didn’t look back. He only hoped no-one had been trampled in the ruckus. Though if one or two of the fanatics broke a heel in the process, justice would be served.

He reached an intersection and looked both ways. This foreign city had turned into a maze and he had absolutely no idea where he was. Back where he’d been accosted, the streets teemed with life. He paused. He stood now in a deserted residential street, a terrace of imposing townhouses lined with trees stark against the night sky.

And no way out.

Cul-de-sac either side and a dead-end straight ahead.

He looked back over his shoulder. There were only three women left in the race, but they were gaining.

A car pulled out of a driveway within the cul-de-sac to his left, picking up speed as it approached his street corner. An open-topped sports car with only one occupant. Blonde was all he had time to register. Drawing on a lifetime’s worth of instinct, he took a running leap and landed face-first in the rear seat, just as the roof began to unfold and close over them.

I’ve always written stories for myself but didn’t even think of being an author until I realized that being over thirty and living in a fantasy world was a little odd. Writing those same stories for other people makes it a lot more acceptable!
By day I dress in cargo pants and boots for my not-so-glamorous job of making movies but at night I come home to my two little Princesses, and I get to write Happy Ever Afters. Since I believe every girl is a princess, and every princess deserves a happy ending, what could be more perfect?
Though my heart lies in Europe, I’m not too good with the cold, so I live in sunny South Africa.

Friday in Focus with Poppy Blake

3 responses to “Blog Tour Review: To Catch A Star”