‘He’s not mine, is he?’ That’s the question I fear the most. You see, I have a secret. My son is not fathered by my boyfriend, but by one of the most famous people that ever lived. And he doesn’t even know it.

One-time celebrity personal assistant to wild boy of rock Johnny Jefferson, Meg Stiles is now settled and living in the south of France with her doting boyfriend Christian and son Phoenix. But they’re living a lie – a lie that will turn their lives upside down and inside out. Because Meg’s son doesn't look like Christian, he looks like his rock star father and, sooner or later, the world is going to realize…

I am a big Paige Toon fan. I love her writing. She hooks you from the very first sentence and this book was no exception.

Baby Be Mine is the squeal to Johnny Be Good. We start off a year and a half after Johnny be Good and Meg now has a baby, little Barney. But she has a secret. The baby is not Christian’s, her boyfriend, but Johnny Jefferson’s, her rock god of an ex. As soon as she found out she was pregnant she prayed it would be Christian’s. Christian is a good, kind sweet man. Johnny on the other hand is a drinking, drug taking , womaniser. As Barney gets older it is quite clear that he’s not Christian’s son. He looks more and more like Johnny every day. Meg is just waiting for her secret to be revealed.

The scenes in France and Barcelona are so well described I feel like I’ve been there. Paige always invests a lot of time in the settings and you can tell she has spent time in these places and really soaked in the atmosphere and scenery.

I really felt for all the characters in this book. Meg’s guilt was eating her apart and it was very difficult to read. Christian was heart broken that Barney wasn’t his son. It literally broke him. Johnny was clearly still in love with Meg but he thinks she doesn’t love him any more. Why would she after everything he’s done to her?

The secret is discovered early on in the book and the rest of it is seeing if Johnny can actually step up to the mark and be a good Dad to little Barney. Oh and of course the big question is will Meg and Johnny finally get their happy ending?

I love the way Paige always interlinks her books. It was great to see the mention of Joseph Strike before he becomes super famous. I had actually read One Perfect Summer and One Perfect Christmas already so I knew who he was a that he was a super famous hot actor.

This books was fantastic. I read it as soon as I finished Johnny Be Good and just couldn’t put it down.

Review: The Longest Holiday
Review: I Knew You Were Trouble 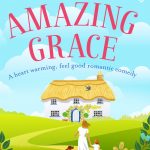