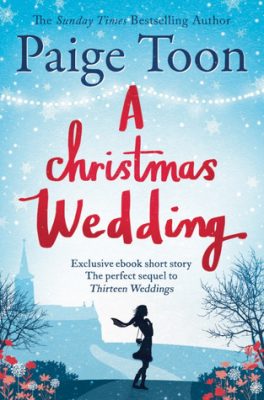 Four years ago, following that fated thirteenth wedding, Bronte fled the UK and has been happily burying her head in the sand ever since. But when an email lands in her inbox from Alex, it seems her past might be about to catch up with her right here in Sydney. Is it time for Bronte to finally face her demons?

With links to The Last Piece of My Heart, Lucy in the Sky and One Perfect Summer , this short story ebook sequel to Thirteen Weddings is a must for all fans of Paige Toon.

I was so excited when I saw that Paige had written a Christmas novella. I loved Thirteen Weddings so I was very excited to see where Bronte was four years later.

Bronte is living in Australia and she’s still with Lachie but is here life exactly what she envisaged? is it what she actually wants?

In Thirteen Weddings I really didn’t like Alex. He was a jerk. But in the four years since Alex has really grown up. He’s clearly regretful of what happened.

It was great to also catch up with some of the characters from Paige’s other books. Seeing Bridget again was a highlight for me, she is such a fun character.

There were some real tear jerker moments in this book but it really was the perfect ending for Bronte.

While this may be a short book it is packed to the brim. Not one part of this story was filler. Paige’s writing is fun and addictive. I couldn’t tear myself away from Bronte’s world. I can’t wait to see what Paige brings us next.

Review: The Sunday Lunch Club
Review: Snowdrops at the Star and Sixpence