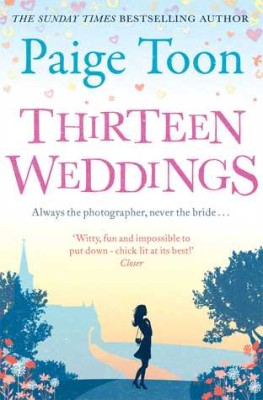 Thirteen Weddings by Paige Toon
Also by this author: The Longest Holiday, Lucy in the Sky, Johnny Be Good, Baby Be Mine
Series: Bronte #1
Also in this series: A Christmas Wedding
Published by Simon & Schuster UK on 22nd May 2014
Genres: Chicklit, Humour, Love & Romance, Romance
Pages: 449
Format: eBook
Source: I bought it
Goodreads
Amazon Kindle, Audible

Bronte never expected to see Alex after their one night together, but she never stopped thinking of him. So when she arrives at work one day to find that Alex is a new colleague, she is secretly thrilled. The only problem is that Alex is now engaged to Zara, the girl he was on a break from the night they met.

Determined to move on with life, Bronte becomes a part-time wedding photographer, alongside her day job. Surrounded by loving couples, warring couples, tearful bridesmaids, mischievous pageboys and interfering mothers-in-law, she tries to navigate her way through wedding after wedding while her heart is being torn apart.

As Alex’s own wedding day draws ever nearer, Bronte and Alex’s chemistry becomes harder to ignore, and Bronte must decide whether to fight for the man she loves, or to let him go forever.

I am a big Paige Toon lover. There’s something about her books that have you trapped from the very first page. They are easy to read and always leave you smiling.

The story starts at Polly’s hen do. Polly has been Bronte’s friend for years but she hasn’t seen Polly for a while. Polly lives in England while Bronte is in Australia. Bronte doesn’t believe in marriage so Polly is pretty shocked when she agreed to come over for the wedding. At the hen do Bronte meets Alex.

Alex well what can I say this boy is a hot sexy loadda trouble. He was trouble from the moment Bronte laid eyes on him.

A year and a half later and Bronte is returning to England after landing a 1 year job at the UK office of the magazine Hebe where she already worked in Australia. I really liked Bronte. She is stubborn and very damaged but I think deep down she just wanted to be loved.

I was so happy to spend some more time with Bridget. She became a great friend to Bronte. Bridget is the best person to  have around, she has an infectious personality. I hope that Paige writes a book focused on Bridget one day.

I was very intrigued to see why Bronte was afraid of churches and why she was so adamant that she didn’t believe in marriage. I had a few guesses up my sleeves but I was way off.

When we met Lachie I thought uh oh here comes more trouble but the more we saw of him the more I liked him and the more I was rooting hot him over Alex despite the obvious chemistry between Bronte and Alex.

I’ve always been a fan of how Paige links all her books. It makes them seem so real. I loved the many updates for previous books that were dropped into this story.

This is a perfect book to read in the sun whether it be in your garden, on the balcony or if your lucky by a pool or beach somewhere very hot.