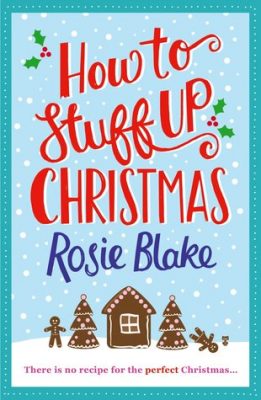 Tis the season to be jolly. Unless you’ve found an intimate picture of another woman on your fiance’s phone…

Eve is heartbroken after discovering her fiance is cheating on her. Being surrounded by the joys of Christmas is more than Eve can bear, so she chooses to avoid the festivities by spending Christmas alone on a houseboat in Pangbourne. Eve gets an unexpected seasonal surprise when handsome local vet Greg comes to her rescue one day, and continues to visit Eve’s boat on a mission to transform her from Kitchen Disaster Zone to Culinary Queen.

But where does Greg keep disappearing to? What does Eve’s best friend Daisy know that she isn’t telling? And why is there an angry goose stalking Eve’s boat?

A hilarious and heart-warming novel about Christmas, catastrophes and cooking, containing exclusive Christmas recipes, from the talented Rosie Blake.

I am still in denial that Christmas is over so I have another festive review for you. I have all three of Rosie’s books on my TBR pile. I read the blurbs and thought they sounded exactly like my kind of book. I love the covers too.

I picked this book up on Christmas Eve. Unfortunately due to seeing so much family I didn’t finish it until early January.

This book follows Evie in the run up to Christmas and this year Evie just wants to get away. Last Christmas she got engaged but only months later she finds out her husband to be is not as committed as she thought. So with Christmas around the corner Evie decides to spend December learning a new skill in Pangbourne. Evie is such a great character. Even though she is heartbroken she s still fun, bubbly and entertaining.

While in Pangbourne Evie meets local vet Greg. This scene made me laugh so much. It was hilarious. Greg is such a sweet man. I liked him instantly. I was very concerned about why he had to keep running off and when I found out the reason I felt for him and shed a tear or two (or maybe a few more).

Rosie’s writing is witty, well paced and enticing. I really enjoyed this festive story and I cannot wait to sit down with Rosie’s other books

Rosie spent her university years writing pantomimes based on old classics. The 2003 production of ‘The Wizard of Odd: Search for the Ruby Strippers’ enjoyed critical acclaim. This was followed a year later with a successful showing of ‘Harry Potter: The Musical’ (complete with moving opening number, ‘In my Cupboard I will Stay’).

Rosie went on to write a winning short story in the La Senza/Little Black Dress Short Story Competition and was shortlisted in a few others including the ‘Women and Home’ annual competition and the Daily Mail ‘Opening Paragraph’ Competition. She started writing novels and after some false starts, and horrendous jobs that she wishes to keep a closely guarded secret (or write about in the future), Rosie wrote How to Get a (Love) Life, which will be published in January 2014 by Novelicious Books.

Rosie likes baked items, taking long walks by the river and speaking about herself in the third person.