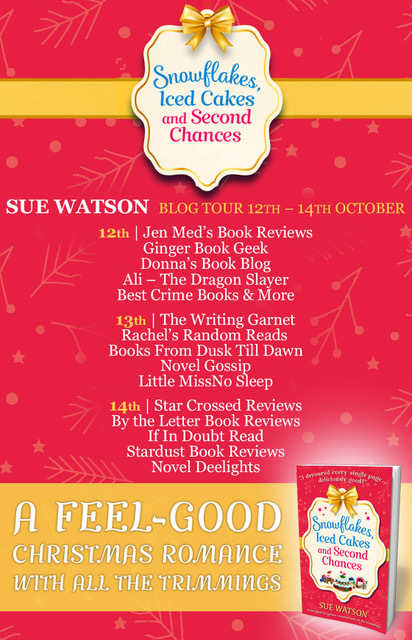 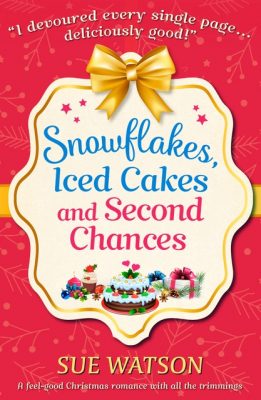 Escape to Devon for blustery walks along the beach, hot chocolate with extra marshmallows and proof that miracles really do happen, especially at Christmas.

A year after she separated from her husband, Gianni, on Christmas Day, Chloe’s heart is still in pieces as she unpacks the decorations for her first ever festive holiday alone. That is, until the phone rings…

It seems Gianni’s new seaside restaurant is in trouble and Chloe must go to Appledore to save the business – and him. Equally famous for his experimental culinary extravaganzas and his explosive temper, Gianni has been really stirring up a sensation with the locals – and not in a good way!

As pans fly and the temperature in the kitchen rises, Chloe’s calming influence and magic touch might just get critics back on side in time to save the restaurant from sinking like a sad soufflé. But will it be enough to save their marriage?

Thank you to Kim for letting me take part in this tour.  I have read a few of Sue’s books and I have really enjoyed all of them.

This story is set mainly in Appledore. If you read Sue’s Ice Cream books from the summer then you have been to Appledore before but if you haven’t then you really are in for a treat. We follow Chloe as she tries to help her estranged husband with his new restaurant.

Chloe’s husband Gianni seems to be a spoilt, egotistical man. When you look deeper though he is a man who has buried his pain so deep because of the need to be the strong man.

I don’t know how Sue does it but whenever I read her books she inspires  my food. when I read Curves Kisses and Chocolate Ice  Cream over the summer I was inspired to have a few healthier meals this time Sue has had me craving proper Italian pasta, hot chocolates and festive ice creams.

There are is a really heart breaking  story line in this book but it is blended with some really funny parts. This book will show you that while you may not end up where you think you will in life, you will be ok.

Christmas Q&A with…Rebecca Raisin
Meme: Between the Cracks : The Greatest Love Story of All Time