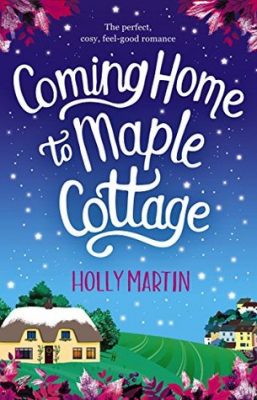 Coming Home to Maple Cottage by Holly Martin
Also by this author: One Hundred Proposals, One Hundred Christmas Proposals, The Sentinel, Tied Up with Love
Series: Sandcastle Bay #3
Also in this series: The Holiday Cottage by the Sea, The Cottage on Sunshine Beach
Published by Bookouture on 28th September 2018
Genres: Chicklit, Humour, Love & Romance
Pages: 296
Source: from Netgalley
Goodreads
Amazon Kindle, Bookshop

This utterly addictive new novel from bestselling author Holly Martin will make you smile until your cheeks hurt, sob tears of pure joy and fall head over heels in love with a totally unforgettable romance…

Isla Rosewood is creating a new life for herself and her sweet nephew Elliot in their cosy, yellow-brick family cottage, brimming with special memories. Living in Sandcastle Bay was never part of Isla’s plan but, after her brother Matthew’s tragic accident, her whole world changed as she unexpectedly became a mother to the little boy she adores so much.

Leo Jackson was always known as Matthew’s fun-loving and wild best friend. But now Matthew is gone, it’s time to put his colourful past behind him. His role as Elliot’s godfather is the most important thing to him. And even though Leo and Isla are two very different people, they both want to give Elliot the childhood he deserves.

As the three of them enjoy time together watching fireworks, baking cakes and collecting conkers, Isla begins to see a softer side to charming Leo, with his twinkling eyes and mischievous sense of humour. And, despite herself, she begins to fall for him.

But does Leo feel the same way? Isla knows their situation is complicated but is it too complicated for true love… or will the year end with a happy new beginning for them all?


Thank you to Bookouture for my copy of this book via Netgalley and for letting me take part in this tour. I have been eagerly awaiting this book since this series began back in April. Isla and Leo are so obviously perfect for each other and I had more than a little crush on Leo.

Leo and Isla have been friends for years but over the last year and a half they have grown closer than ever. They spend every day together and probably have a closer relationship than most actual couples.

I loved that it was set at autumn time. Most books skip straight from summer to Christmas so it was a nice change to have a crisp autumnal setting instead.

Holly has outdone herself with this book. The characters are so real and the issues in this book really pull on the heart strings. Losing Matthew has been hard on not only Isla but also Leo and the rest of the family. As well as many emotional scenes Holly had me crying with laughter. Most of these involved little Elliot who just became funnier and funnier as the book progressed.

I also loved what Holly did with the fireworks at the end of the book. It was a lovely little touch for her readers.

I really enjoyed my trips to Sandcastle Bay and I will miss this cast of characters but I also look forward to meeting a new bunch of characters in whatever wonderful place Holly takes us to next.