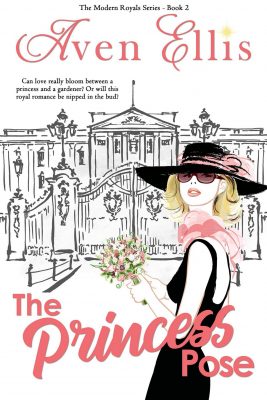 A modern princess. A charming commoner. Can they hurdle tradition to find true love?

Princess Elizabeth “Liz” of York isn’t interested in a fairy tale life. Determined to use her elite platform to champion children’s causes, she’d much rather raise awareness than find her prince. If only she could stop picturing one certain gardener with vivid hazel eyes…

When the relentless paparazzi invade her space, Liz’s crush comes to her rescue and steals her heart. Tossing aside centuries of tradition for something real, she takes Roman’s calloused hand and braces for the backlash. But after her progressive approach ruffles, more than a few feathers, one member of the monarchy vows to keep the princess locked in her stylish but decidedly ivory tower.

Can Liz break through her birthright to find a powerful kind of love?

The Princess Pose is the second standalone book in the charming Modern Royals romantic comedy series. If you like strong heroines, determined love, and lots of laughs, then you’ll adore Aven Ellis’s sweet tale.

Thank you to Aven for my copy of this book. As you might know, I am a HUGE fan of Aven and her writing style. This is the second book in the modern Royals series but it could be read as standalone.

This book follows Liz and Roman. Liz and Roman met briefly in A Royal Shade of Blue (book 1) but in this book we see them interact properly for the first time.

Liz is not in direct line for the throne and is the niece to the current King and Queen. Liz has fought hard to still be a working Royal because she wants to use per position to help young people as much as possible. She is very passionate about her causes and is very strong-willed.

Roman is a gardener at Cheltham House estate. Roman is gorgeous. He is smart, he is hardworking, he is super genuine as well. Roman is super easy to fall in love with. While he is a private man he is willing to put up with anything for Liz.

I have to mention Roman’s cousin Darcy. He has stolen my heart and I pray that Aven will write him his own book.

Aven takes her research seriously and that comes across in the book. Aven researches not only all the Royal protocol but the locations and the language. As Liz is English, Aven made the decision to write the book in English over American English and as a fellow Brit, I was excited by this.

I said this in my review of the first book but I love love love the squad! I love that they are trying to modernise the royals and make themselves more relevant. I can’t wait for Xander’s story which I think is the next in this series!