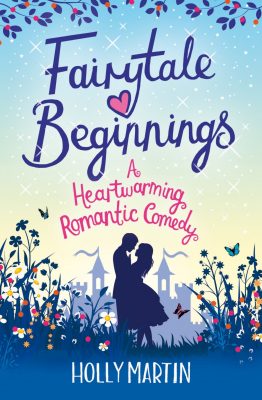 Love is an open door…except when it keeps slamming in your face
Hopeless romantic Milly Rose has had her fair share of heartbreak. Obsessed with all things Disney, she refuses to give up on finding her Prince Charming – he’s out there somewhere, isn’t he?

When Milly is given a job to investigate the origins of a historical building in the village of Clover’s Rest, she’s not sure what to expect. What she discovers takes her breath away – a beautiful real life Cinderella castle, complete with turrets, a magnificent drawbridge AND a very handsome owner…Cameron Heartstone.

As Milly and Cameron begin to unearth the secrets of Clover Castle, they can’t ignore the intense chemistry building between them. But they’ve both been hurt badly before. Can they take a big leap of faith and find their own happily-ever-after?

A deliciously enchanting read that will delight fans of Rachael Lucas, Lucy Diamond and Miranda Dickinson or anyone who has ever blubbed at a Disney movie. Who says real life can’t be a fairytale?

Firstly I would like to thank Holly and Kim for letting me take part in this tour. I am a huge fan of Holly’s books so I was thrilled when she asked me to be part of it.

I have literally just turned the last page of the book and scrambled out of my bed as quickly as possible to write this review. If you follow me on twitter you’ll know I woke up at 6:30am! to carry on reading. Before I get into the story I want to say what a brilliant writer Holly is. She has a way of captivating you and pulling you into the world of whatever story she has written, whether it be a romantic fairytale like this one or an epic fantasy like, The Sentinel and The Prophecies. I absolutely adore every single one of Holly’s books and I highly recommend you read them.

I, like Milly, love fairytales and all things Disney. Milly has had a less than disney magic filled life. She has had her heart broken a few times and is adamant that she will never get her happily ever after. That is until she meets Cameron.

Cameron has just inherited a castle he doesn’t want and can’t afford. The place is surrounded by debt and now the villagers hate him for making them redundant. Castle Heritage is his last hope. All Cameron wants to do is hide away and write his books. He doesn’t want to be disturbed and he certainly doesn’t want to fall in love again. He’s had his fair share of heartbreak and he doesn’t need any more.

Milly and Cameron are such loveable characters and you can’t help but root for them to fall in love from their first meeting, which by the way is hilarious. The story had so many twists and turns that I struggled to put it down. I was turning page after page and then all of a sudden I was at 95% and I didn’t want it to end.

The ending was absolutely beautiful. I had tears (happy ones) streaming down my cheeks and the biggest smile on my face.